Three Missing After Japanese Ro-Ro Collides with Tanker and Sinks

The Japanese Coast Guard is searching for survivors after a ro-ro cargo ship collided with a chemical tanker and sunk in the Kurushima Strait in southern Japan. Nine crewmembers from the cargo ship have been rescued but the captain, first engineer, and second engineer remain missing.

The Japanese ro-ro Byakko, owned by the Prince Kaiun Co., departed Kobe on the afternoon of May 27 heading north for the port of Kanda. The 6,800 dwt vessel was less than a year old built to operate in coastal waters carrying up to 800 commercial vehicles and trailers. There was a crew of 12 aboard.

At around midnight, the Japanese Coast Guard received a distress call from the ro-ro after it had collided with the chemical tanker Ulsan Pioneer. The 3,481 dwt tanker, registered in the Marshall Islands and owned by a South Korean company Heung-A-Shipping, was traveling between China and the Japanese port of Osaka, where it was due to arrive on May 28. The vessel, with 13 crew, sustained significant damage to its bow but has remained afloat. 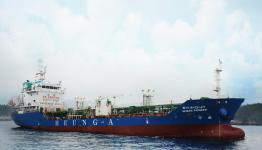 The Japanese Coast Guard dispatched 14 patrol ships and three aircraft for the search in the Seto Inland Sea. The search was taking place approximately 2.5 miles north of Imabari in southern Japan.

The Byakko reportedly sunk at approximately 2:45 a.m. local time less than three hours after the collision.

A total of nine crewmembers were recovered from the water. The Japanese Coast Guard located five people while a containership sailing in the area was able to rescue four of the crew from the ro-ro.

The Kurushima Strait where the collision occurred is an active shipping lane with the Coast Guard reporting that more than 400 vessels a day pass through the area. The Coast Guard says that there have been no leaks from the tanker, and they are monitoring for pollution from the sunken vessel.