Libyan warlord Khalifa Haftar has agreed to end his eight-month blockade on the oil terminal at Tobruk, allowing a tanker to enter the port and take on a load of crude oil.

In talks brokered by the Russian government last week, Haftar negotiated a deal with Ahmed Maiteeg, the deputy prime minister of the internationally-recognized Government of National Accord, which controls the western portion of Libya's coastline. Haftar controls the eastern half of the country and has waged a long-running campaign to unseat the Tripoli-based government, with suspected support from the UAE, Egypt, France, Sudan, Russia and other state actors. The effort paused in June after his forces were repulsed from the city's outskirts. 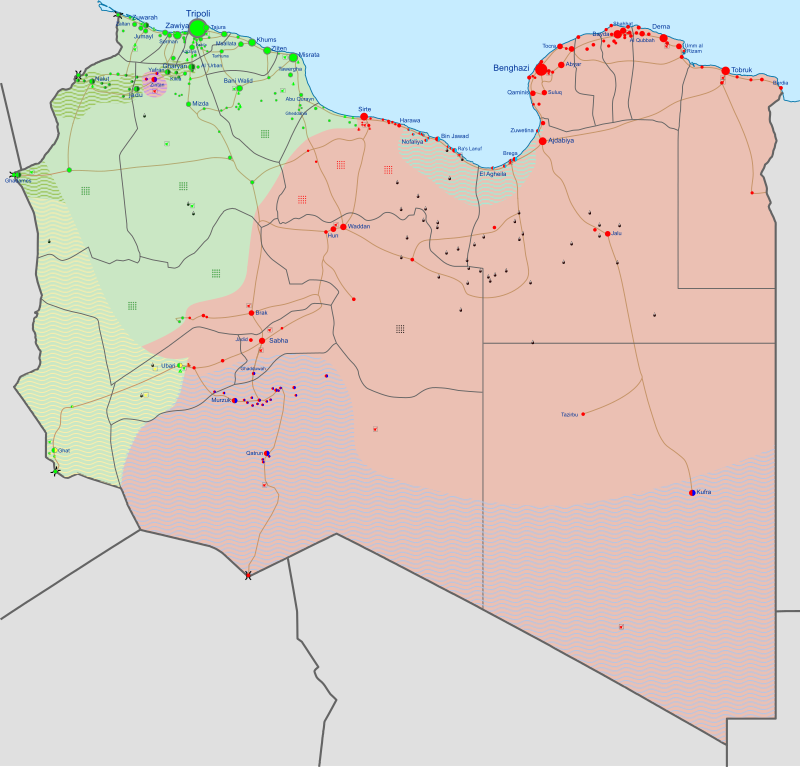 Libya circa June 2020: Areas controlled by Haftar (red) and the Tripoli-based Government of National Accord (green) (courtesy Ali Zifan)

With the opening of the Marsa El Hariga Terminal in Tobruk, three of Libya's main oil ports have now resumed operations. Libya's National Oil Company also agreed to lift force majeure restrictions on the Brega and Zuetina terminals after certifying that they were combatant-free. The large terminals at Es Sider, Sawiya and Ras Lanuf remain closed and are still "being evaluated according to the safety and security standards in force in the national oil sector," the NOC said Tuesday.

Armed takeovers, attacks and embargoes have affected Libya's export terminals many times since the fall of the Muammar Gaddafi regime in 2011. Haftar's blockade began in January, and with limited options for accessing the export market, Libya's oil production fell from 1.2 million barrels per day to less than 100,000 barrels per day as storage filled up. Now that Haftar has secured "conditions that ensure a fair distribution of revenue" between his forces and the Government of National Accord, exports and production may resume.