The cruise industry is preparing for the launch of three large cruise ships before the end of the year each fueled with liquified natural gas. It is part of the industry’s push to improve its environmental performance with cruising being among the shipping sectors that are rapidly adopting LNG.

Cruising launched its first ships able to operate entirely on LNG at the end of 2018 and has moved to a total of seven large cruise ships already in service using LNG with three more scheduled to enter service in November and December this year. Currently, there are a total of 10 LNG-fueled cruise ships, including three smaller vessels and the seven large cruise ships, plus an additional 25 either under construction or on order for delivery by 2028. Four additional LNG cruise ships are also under option.

Carnival Corporation was the first to introduce LNG-fueled cruise ships working with Germany Meyer Werft to develop the designs for the first large cruise ships. The AIDANova launched in 2018 as the first in the class, with the design platform being adopted by Costa, P&O, and Carnival Cruise Line as well. Recently, the next two ships built from the LNG platform marked key milestones as they prepare for their upcoming maiden voyages.

Carnival Cruise Line’s second of three LNG-fueled cruise ships, Carnival Celebration set sail on her first round of sea trials Monday, September 5, from Meyer Turku shipyard. The Finland shipyard built two LNG cruise ships for Costa and is now completing the second of two cruise ships for Carnival. The Carnival Celebration had a full contingent of officers, technicians, and engineers on board to thoroughly test the ship’s technical, mechanical, and navigational systems when it went to sea for the first time at the beginning of September.

“During her sea trials, Carnival Celebration underwent several tests, which are meant to determine the ship’s capability and her performance. We’ve done many maneuvering tests, such as endurance tests, steering tests, speed tests, and thrusters tests. The ship performed wonderfully, and shortly, we will get her out and start cruising,” reported Captain Vincenzo Alcaras.

The Carnival Celebration enters service on November 6. She will be making a special transatlantic sailing from Southampton to Miami before beginning 7-day cruises to the Caribbean. She will become the first LNG-fueled cruise ship to be based in Miami. 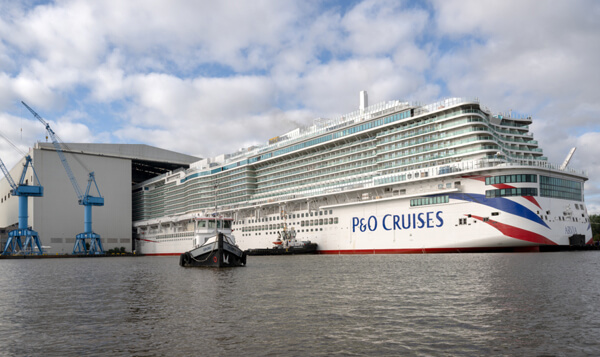 Another cruise ship built on the same platform, P&O Cruises’ Arvia being built at Meyer Werft in Germany also marked a milestone on August 27. The 1,130-foot long cruise ship was maneuvered out of Meyer’s covered building dock II. The float-out began early in the morning with the ship positioned alongside the fitting out dock where the funnel and mast will be lifted onto the ship by crane. The ship’s lifeboats also arrived at the yard and will be placed into the davits while she is at the fitting out dock.

The Arvia is expected to undertake her conveyance on the Ems out to the North Sea early in October. She will then undergo sea trials and final fitting out before her handover. Her maiden voyage is scheduled for December 9, sailing round trip from Southampton to the Canary Islands.

After Arvia left the building hall, the floating engine room module for the third Carnival LNG-fueled cruise ship, Carnival Jubilee was moved into the dock to be joined up with other blocks that had already been assembled in the hall. The Carnival Jubilee is due for delivery in late 2023.

Based on the same platform, all three of the ships are approximately 180,000 gross tons accommodating more than 5,200 passengers. They have common design elements such as a three-story atrium and unique elements for each cruise line. P&O is expanding the dining and entertainment options while Carnival Celebration has an area to highlight Miami and special elements, including fittings and furnishings from the company’s earlier cruise ships, to mark Carnival’s 50th anniversary.

MSC is also preparing to launch its first LNG cruise ship, with the MSC World Europa marking a key milestone on September 10. The vessel completed her first LNG bunkering in the French port of La Rochelle. At 215,863 gross tons, she becomes one of the world’s largest cruise ships. Her naming ceremony is scheduled for November 13 in Doha, the capital of Qatar, while the ship is serving as a hotel during the World Cup matches. She will cruise from Qatar till March 2023 before repositioning to the Mediterranean.