A growing number of shipping companies across different segments of the industry are continuing to test variations of biofuels as an alternative to improve operations. Among the recent projects was what is being called the world’s longest-running trial of biodiesel on marine engines. The goal was to complete endurance testing in operations across several ships.

During the trials, conducted by CSL Group in partnership with Canada Clean Fuels and with the collaboration of Sterling Fuels, 14,000 tons of MGO, a fossil fuel, was substituted for 100 percent bio-content second-generation biofuel. The test accumulated nearly 30,000 running hours encompassing half of CSL’s Canadian fleet. Completing the test in late November, CSL reports that it was able to operate its ships with no modification to existing equipment and it resulted in a 23 percent total fleet life cycle reduction of CO2 as compared to marine gas oil (MGO).

"Our test results confirm the potential of biodiesel as a realistic and immediate alternative to fossil fuel that holds great potential to support the decarbonization of the marine transportation sector in Canada and throughout the world,” said Louis Martel, CSL's President and CEO. “We encourage the International Marine Organization, the Government of Canada, and governments around the world to recognize the credible impact of biofuels as an interim solution in reducing emissions, and to support and implement a cost-competitive framework that promotes its use and secures supply."

CSL's biofuel trials were conducted on eight ships for six months under a Transport Canada testing protocol. The B100 biodiesel was tested on main and auxiliary engines and required no modification to existing equipment. Sourced in North America, the biofuel used was produced entirely from waste plant material. Emissions reductions were calculated through the Canadian government life cycle emission tool GHGenius. 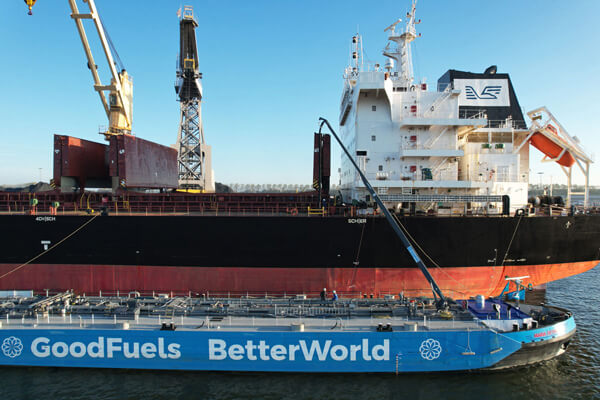 Eagle Bulk Shipping also reported its first successful trial sustainable biofuel voyage in cooperation with GoodFuels. The Sydney Eagle, an Ultramax bulker, was bunkered with GoodFuels’ advanced marine biofuel during its port call at Terneuzen, the Netherlands. Basis the Company’s calculations, the vessel’s well-to-exhaust CO2 emissions were reduced by approximately 90 percent during its voyage, as compared to utilizing traditional bunker fuel.

Similarly, in a first for the Indian steel industry, Tata Steel working with Japan’s NYK successfully completed a trial use of biofuel to transport cargo provided by Tata Steel. The voyage involved a cargo of approximately 1,60,000 tons of coal transported from Gladstone, Australia to Dhamra, India aboard the bulker Frontier Sky, owned by NYK and operated by Tata NYK Shipping.

It was a second trial of biofuels for NYK, which wanted to further verify safe vessel operations along with the GHG emission reduction. NYK provided technical support including biofuel refueling arrangements and engine operation planning. Tata NYK provided operational know-how and extensive support during the voyage. According to the companies, GHG emissions are expected to be reduced by approximately nine percent when biofuels are used as compared to traditional bunkers. The three companies said they hope to move to large-scale implementation of biofuels in the future.