Continuing supply chain disruptions resulting from the COVID-19 pandemic and repercussions from the war in Ukraine are continuing to impact cruise ship construction. The new brand Explora Journeys being developed by MSC is the latest to announce a delay in the maiden voyage of its cruise ship following previous announcements from Norwegian Cruise Line similarly rescheduling the first sailings of two of its new cruise ships.

Following the global shutdowns due to the pandemic in 2020, the shipyards worked with the lines to reschedule the delivery of newbuild cruise ships. While the result was that none of the major lines canceled any of their major orders, delivery dates were typically reset by as much as six months to accommodate the impact on work schedules at the yards. Persistent problems in supply chains and then the invasion of Ukraine however created unexpected additional challenges for the shipbuilders which use a global network of suppliers, including contractors from Eastern Europe.

The first of Explora Journey’s new cruise ships, the Explora I, was floated at the Fincantieri shipyard in Monfalcone, Italy on May 30, 2021. The 813-foot cruise ship will be 63,900 gross tons with accommodations for 922 passengers. Explora, which is MSC’s entry into the upscale, luxury cruise segment, said it would kick off operations with a May 31, 2023, 11-night maiden voyage from Barcelona to Athens. The cruise ship was scheduled to spend the next weeks operating in the Mediterranean before repositioning in July 2023 to Northern Europe.

“We are working with one of the world’s foremost ship and super yacht builders to create the best luxury hospitality brand and experience. However, taking into consideration the challenging situation facing the world today including global supply chain complications we have had to take the difficult decision, agreed with the shipyard, Fincantieri, to update our ship’s coming into service schedule,” said Michael Ungerer, CEO of Explora Journeys, earlier this week writing to passengers and travel advisors to inform them of revisions to the company’s launch plan.

The maiden voyage is being delayed nearly two months to July 17, 2023. The first cruise will now depart from Southampton, England sailing to Northern Europe. Details of the launch voyages have not been released with the website not offering online bookings until August 2023.

“The additional time at the shipyard and at sea prior to her first journey will be utilized to ensure that Explora I can and will deliver to the fullest on our brand’s promise and vision,” said Ungerer noted that they would make absolutely no compromise on quality and luxury for the launch. 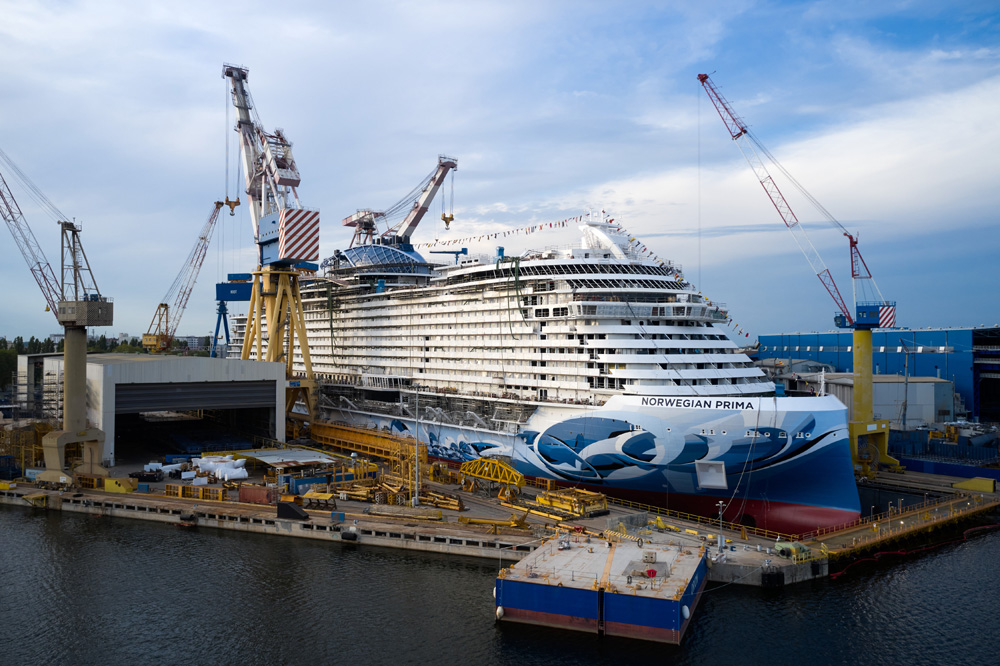 Explora’s delay comes just two months after Norwegian Cruise Line announced that the second of its new cruise ships, also being built by Fincantieri in Italy, would be delayed also due to supply chain issues. The ship had originally been scheduled to enter service in June 2023, later delayed to July, and recently further delayed to August 26, 2023. In addition to supply chain challenges, CEO and President of Norwegian Cruise Line Harry Sommer speaking during the launch of Norwegian Prima noted that the war in Ukraine had also impacted Fincantieri’s supply chain. The shipyard builds sections for new constructions at its shipyard in Romania using the Black Sea to transfer the blocks to Italy for assembly.

It is the second delay for Norwegian due to supply chain issues. The company’s first new cruise ship, the Norwegian Prima, was delayed for several weeks with the company reworking preview trips and the introduction.

The Norwegian Prima was delivered to Norwegian on July 29, nearly a month beyond the anticipated schedule. She was christened in Reykjavik on August 27, sailing first to Amsterdam in the Netherlands and commencing a series of introductory voyages that recently repositioned her first to New York. She continues to sail cruises before reaching her first homeport in Florida for the winter of 2022-2023.