On Monday night, weather conditions calmed enough to allow salvors to board the boxship Zim Kingston, which lost 40 containers and caught fire in the Strait of Juan de Fuca last weekend.

Six firefighters from Resolve Marine were able to board the Zim Kingston last night, accompanied by seven crewmembers. The salvage master and Resolve's team will assess the situation on Tuesday. At present, they believe that it may take several days to fully suppress the last smoldering fires inside burnt containers, according to the Canadian Coast Guard.

As of Monday morning, the fire had largely burned itself out, though some smoldering was still visible.

#CCGLive - A Coast Guard overflight of the #ZimKingston at 11:30 today shows smoldering but no visible flames in the containers. However, firefighters may find some active fire in the containers once they are able to board the ship. pic.twitter.com/PHjfjf6Fg7

The Canadian incident command team is working with the shipowner to determine which boxes went over the side in a storm on Friday and which were consumed in the fire. Luckily, the blaze was contained to a single stack and fire damage to adjacent stacks appears limited.

As of Monday, the boxes that went overboard from Zim Kingston were drifting northwest along the west coast of Vancouver Island, paralleling Pacific Rim National Park and several other nature preserves. They are not presently expected to come ashore. Rough offshore weather conditions from a severe "bomb cyclone" have interfered with efforts to carry out a container salvage mission, but U.S. Coast Guard tracking mission continues so that any surviving boxes (which pose a hazard to navigation) can be retrieved later. Mariners transiting the entrance to the strait are advised to exercise caution and maintain a lookout for partially-submerged containers. 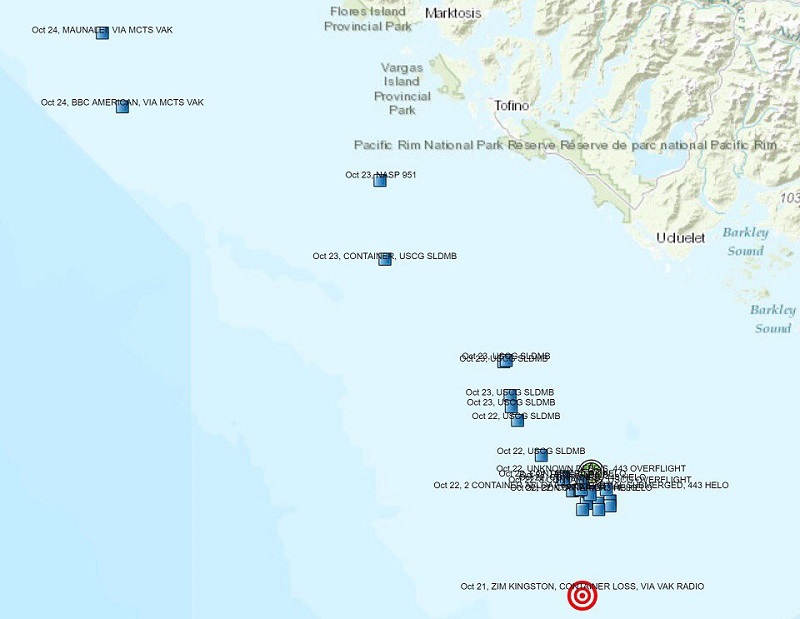