RRS Sir David Attenborough Powered Up for the First Time

The RRS Sir David Attenborough's power system has been commissioned at Cammell Laird’s shipyard  in the U.K.

One of the most advanced polar research vessels in the world, the new polar research ship for Britain is capable of breaking through ice one meter thick at a speed of three knots, and will allow up to 30 crew members, plus 60 scientists and support staff, to access some of the most remote locations on the planet.

The ship’s diesel-electric propulsion system is powered by two six-cylinder and two nine-cylinder Rolls-Royce Bergen engines. These provide electrical power generation for the electric propulsion motors, auxiliary systems and hotel services. The configuration of different engine sizes allows for efficient operation across the wide range of conditions that the vessel is likely to encounter. The generators are supported by battery banks that ensure that the generators run at as near to as constant loading as possible. This more constant loading will result in an increase in efficiency and therefore lower diesel consumption. 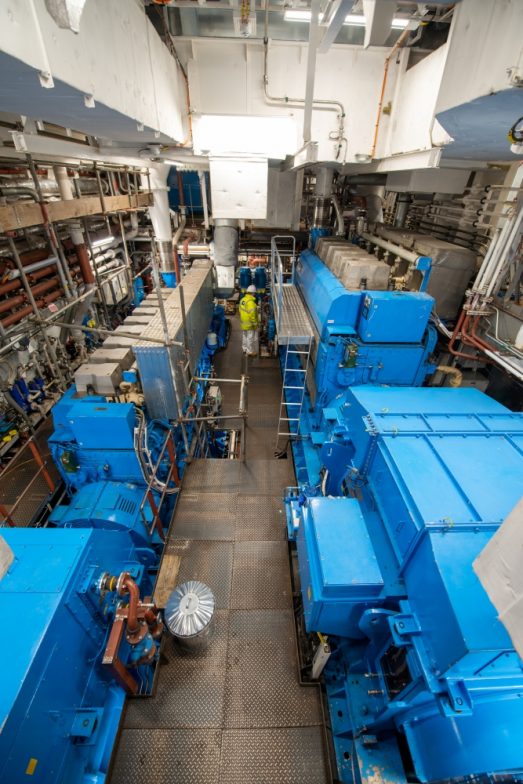 The ship has been designed to have extremely low internal and underwater radiated noise levels. Its engines will run as silently as possible to minimize any disturbance to marine wildlife and to avoid interference with sensitive acoustic and seismic instruments on board. The engines’ foundations sit on rubber noise dampers – an integral part of the vessel’s low underwater radiated noise design.

RRS Sir David Attenborough’s engines run on low sulfur fuel containing less than 0.1 percent sulphur and have good fuel efficiency down to very low loads by utilising Variable Valve Timing. They are fitted with a Selective Catalytic Reduction (SCR) system and an electronic engine management system with an integrated control unit, designed to monitor and control all key engine functions and exhaust after treatment.

Thanks to a range of solutions including an energy management system, cutting-edge sensors and remotely-operated robotic technologies which all come under Kongsberg Maritime’s ‘Full Picture’ scope of delivery, the RRS Sir David Attenborough’s design focuses on fuel and logistical efficiency, and is expected to save in excess of £100 million in operating expenditure over the course of its 30-year lifespan.

Additionally, the lifeboats, each capable of carrying 90 people, are now in position on both sides of the vessel. RRS Sir David Attenborough is the first IMO’s Polar Code-compliant ship to be built in the U.K. These regulations extend to the ship’s lifeboats and davits, all of which are capable of operating at the Polar Service Temperature of -35?C. British Antarctic Survey and Norsafe worked closely to develop the equipment, guided by the results of lifeboat search and rescue expedition trials carried out in the Arctic. 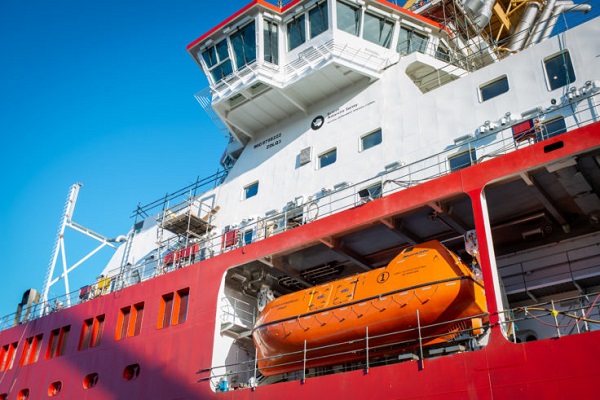 Ralph Stevens, Captain of the RRS Sir David Attenborough, said: “We are working closely with Cammell Laird to commission and test every aspect of our new ship. These two events – power on and lifeboats in – mark a significant moment in the build. In the coming months we will begin to see many other elements completed and ready for sea trials. It is an exciting time to be at the shipyard.”