Royal Navy and USCG Team Up for Anti-Narcotics Effort

The Royal Navy auxiliary RFA Mounts Bay has embarked a U.S. Coast Guard sniper squadron and a law enforcement boarding team to join the anti-smuggling effort in the Caribbean. The U.S. Coast Guard's counter-narcotics teams - who have not been paid since December 31 due to the ongoing shutdown - will partner with the crew of Mounts Bay to target go-fast smuggling boats.

Mounts Bay provides the UK’s long-term naval presence in the Caribbean. The ship dedicates her summer and autumn seasons to disaster relief operations in the wake of hurricanes, an all-too-frequent mission in the region. The rest of her year is focused on counter-narcotics patrols.

To further this mission, Mounts Bay has embarked a Coast Guard HITRON team (Helicopter Interdiction Tactical squadRON) and a LEDET (Legal Enforcement DETachment). Coast Guard LEDETs often lead the way for American and allied interdictions at sea, not just from the service's own cutters, but from U.S. Navy, Canadian Navy and British vessels as well.

The USCG's HITRON squads chase down go-fast boats using a helicopter, and if necessary they shoot out the boat's engines with high-caliber rifles (after warning shots). This dramatic tactic gives surface forces a chance to catch up to the high-speed smuggling craft and conduct a boarding. Over the course of 20 years in operation, the squad's aircrews have intercepted more than 500 boats, 420,000 kilos of cocaine and 27,000 kilos of marijuana with a wholesale value of more than $17 billion. 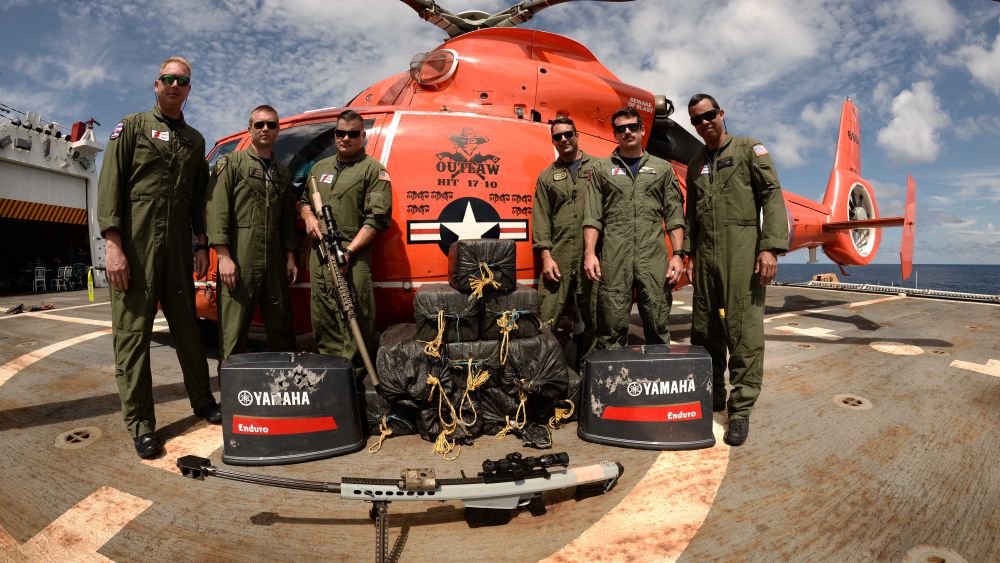 The teams joined the Mounts Bay in Miami in December, then sailed for Curacao. The LEDET will conduct most board-and-search operations by boat, so Mounts Bay’s Pacific 24 RIB took them out for test runs to give them a chance to practice boat-to-boat boardings with a "suspect" craft.  The HITRON team's helicopter has been practicing operations from Mounts Bay's deck, including coordinated drills involving the helicopter and boats against a simulated target – a small boat crewed by some of the auxiliary’s sailors.