Scandlines, which operates ferries between Germany and Denmark, proceeded with the installation of its second rotor sail on one of its hybrid ferries. The company decided to install the rotor based on its positive experience during more than a year of testing on a sister ship and the strong benefits which will help it to achieve its goal of becoming emission-free by 2040.

Working with Norsepower, the installation of the rotor sail was completed yesterday, May 16, aboard the 22,300 gross ton ro-ro ferry Berlin. The rotor, which stands 98 feet above the deck and has a 16.5-foot diameter, was fitted during an overnight stopover in Rostock, Germany. Norsepower developed a two-stage installation program with Scandlines, During the first phase of preparation which was previously undertaken a steel foundation was fitted to the deck and then the wiring and other installation can proceed while the vessel is in service. The rotor was lifted by a crane dockside and fitted into place during the stopover.

Scandlines fitted its first rotor sail in August 2020 aboard the sister ship ro-ro ferry, the Copenhagen. The company reports that its route between Rostock and Gedser is well suited to the technology as the vessels operate perpendicular to the prevailing winds. With the rotor sail from Norsepower, Scandlines achieved CO2 emissions reductions from the hybrid ferry by an average of 4 percent, and on good days with optimal wind conditions by as much as 20 percent. 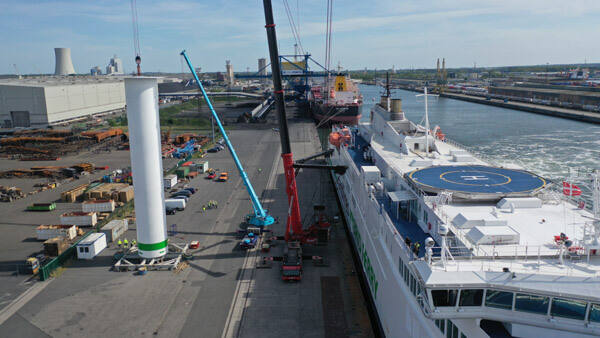 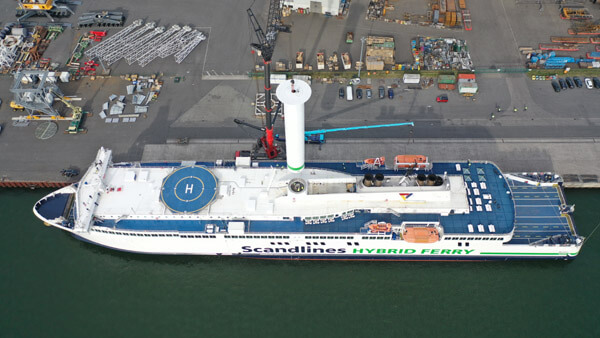 “After positive experiences with the rotor sail on the hybrid ferry Copenhagen, Scandlines had prepared the sister ferry Berlin for a rotor sail,” said Michael Guldmann Petersen, COO of Scandlines. “We are happy to see, that the installation was successfully completed and that the ferry went into operation again this morning as planned.”

The rotor sail is a modern version of the Flettner rotor and the technology is based on the Magnus effect. When wind meets the spinning rotor sail, the airflow accelerates on one side and decelerates on the opposite side. The change in the speed of airflow results in a pressure difference, which creates a lift force that is perpendicular to the wind flow direction. This lift force allows Scandlines to reduce the use of diesel engines and therefore reduces both the fuel consumption and associated emissions.

The rotor sails are fully automated. The system measures the wind speed and direction and based on these measurements calculates whether the use of the rotor sail will reduce emissions. If so, the system starts automatically and the system can be disengaged for specific port areas which are not suitable for its use.

The rotor sail was fitted on the company’s two newest hybrid ferries. Both were built in Germany in 2016 and measure 556 feet in length. They have a capacity of 1,300 passengers as well as up to 460 cars or 96 trucks. The ferries use a hybrid propulsion plant and are fitted with scrubbers to reduce emissions. The vessels were tailor-made for the route, optimized for shallow waters with the shape of the hull also contributing to lowering fuel consumption.

Expanding the use of the rotor sail technology to its second vessel the companies said highlights the viability of wind power, and the emissions savings which can be achieved for use of the technology.