The Kjell Inge Røkke-backed research yacht Rev Ocean has hit a long delay, according to its backers. Røkke's purpose foundation, also named Rev Ocean, has confirmed that the giant ship will not deliver in 2021 as expected. It may not be operational until the middle of the decade, project manager Nina Jensen told Dagens Næringsliv, and will likely first sail between 2024-2026.

Rev Ocean is the largest yacht under construction anywhere in the world, according to luxury lifestyle magazine Robb Report. At 600 feet overall - including an unconventional pointed bowsprit - it will exceed the length of the UAE-owned megayacht Azzam by 10 feet. It will also be the largest research vessel ever built.

According to the foundation, Rev Ocean's primary objectives are to support ocean science related to plastic pollution, climate change, ocean acidification and overfishing.
Monaco-based megayacht architect Espen Øino provided the yacht-like design; its research-related features include a moonpool and an enclosed launching bay on the port side. Its $350-500 million reported price is sufficient to cover the cost of up to three standard AGOR-class ships. 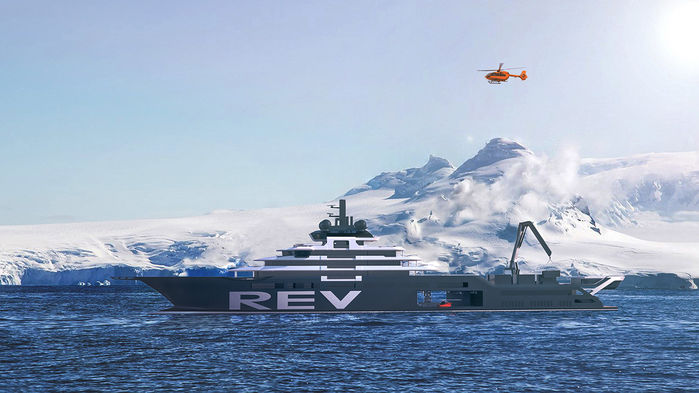 Rev Ocean's hull was launched at Vard's yard in Romania and towed to a shipyard in Norway in 2019, but the outfitting process has hit challenges related to technical issues and vessel weight, Jensen said. "I think without a doubt that both he, I and the rest of the team are extremely frustrated, annoyed, depressed - actually the whole emotional register - because we are impatient to get out to sea," Jensen told DN.

The foundation also had plans to build a giant skyscraper dubbed the "World Ocean Headquarters" outside Oslo. It encountered issues with municipal zoning height limitations and strong local opposition, and it was canceled in 2019. If it had been constructed, it would have been the tallest building in Norway.