Robbery and Piracy Declines in 2021 Except in the Singapore Strait

The regional organization that coordinates efforts to combat piracy and armed robbery against ships in Asia, ReCAAP, has once again issued a warning about the level of activity in the Singapore Strait and in particular in one zone near Bintan Island, Indonesia. ReCAAP reported two additional incidents on July 17, while the organization reported a decline in overall activity during the first half of 2021.

The latest incident alert reports that there were two unauthorized boardings both on July 17 while each ship was underway off Tanjung Pergam, Bintan Island, Indonesia. The two incidents occurred approximately 30 minutes apart and in the same area of the Singapore Strait in the eastbound traffic lane. In both cases, the boarders were spotted by the crew members that reported that the boarders were armed with knives. In one incident they were seen in the engine room and the other in the steering gear room. In both cases, they fled once they were discovered and both ships reported that their crew was unharmed and nothing had been stolen. 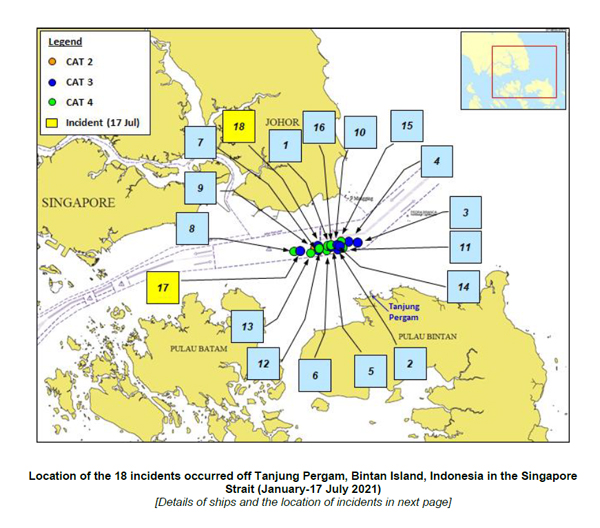 News of the latest boardings came just after ReCAAP issued its six-month report during which time it says armed robbery against ships in the region declined by more than a third versus 2020. While there were 35 incidents and two attempts, there were no reports of piracy, only pretty crimes, and 20 of the incidents detailed in the six-month report were in the area of the Singapore Strait. That represented a 25 percent increase in reported incidents over 2020 in the Strait.

Overall, the severity of the incidents also declined during 2021. In more than two-thirds of the reports, the perpetrators were not armed, and no crew was harmed. In addition, there were no abductions of crew in the Sulu-Celebes Seas and the waters off Eastern Saba, with the last incident in January 2020. Further, the four crew members abducted in January 2020 were rescued in March 2021 by the Philippine authorities.

While incidents are down overall in the region, ReCAAP highlights that there have also not been arrests to disrupt the gangs that have carried out some recent boardings of ships. As such, they repeated the call for cooperation and reporting warning ships to remain on guard at all times.