Managing urban areas is one of the greatest challenges of the 21st century, and DNV GL has developed a new methodology that focuses on resilience as the key to coping with climate-related stresses and the challenges of meeting the U.N. Sustainable Development Goals.

Almost all aspects of a city are affected by climate change. Cities are also major drivers of the climate change that threaten their own wellbeing. However, cities are not necessarily at the mercy of climate change. Cities are of critical importance in meeting the Paris Agreement, the U.N. Sustainable Development Goals and the pledges and obligations in the New Urban Agenda, Habitat III. The New Urban Agenda is the U.N. framework setting out how cities should be planned and managed to best promote sustainable urbanization.

David Walker, DNV GL Chief Development Officer says: “For cities, resilience is the ability to cope with stresses and changes while continuing to develop. Urban populations are growing, and it is in cities that the success of the Sustainable Development Goals will largely be determined. To maximize their potential as positive agents of change, cities need to become both digitally and physically smart, and this is where we think our framework for resilience can make a difference.”

In its new position paper “Changing Cities in a Changing Climate,” DNV GL presents its Systems and Urban Resilience Framework (SURF) as a foundation for developing successful strategies that reduce physical and operational losses and save lives. These strategies also allow cities to compete more effectively by offering greater security for their inhabitants, as well as safer investment opportunities for businesses.

“This research output adds to DNV GL’s capabilities as a trusted technical advisor to coastal cities and ports around the globe,” says David Walker.

The framework, SURF, is essentially a systems-based approach that deals with the city as a whole – its ecological, structural, socioeconomic, and governance systems. Critical issues can accumulate over time, and there is often a delay from actions to results. This is where a systems-based approach offers superior insights by considering reinforcing and balancing feedback loops.

“The challenges of climate change and city development are both immense and interconnected: one aspect cannot be managed independently of the other,” says Alexander F. Christiansen, Principal Researcher in DNV GL’s Climate Action Programme. 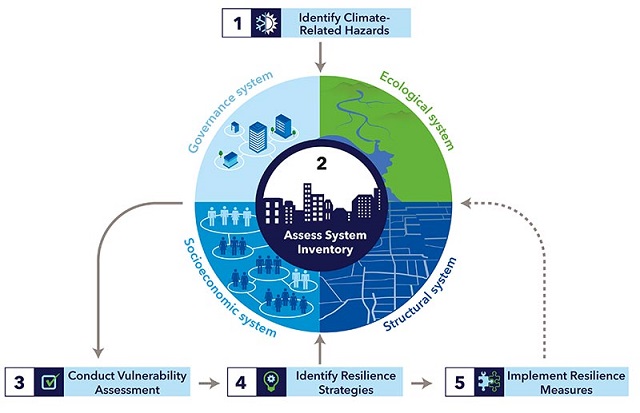 The framework involves constructing computer models and conducting simulation exercises with a diversity of stakeholders.

Cities are already overflowing with relevant data, he says, and sources are growing as sensors are employed to monitor everything from natural systems to traffic and energy.

“Almost all aspects of a city are affected by climate change,” says Christiansen. “Cities are themselves major drivers of the climate change, however they are not necessarily at the mercy of climate change. SURF offers a way forward.” 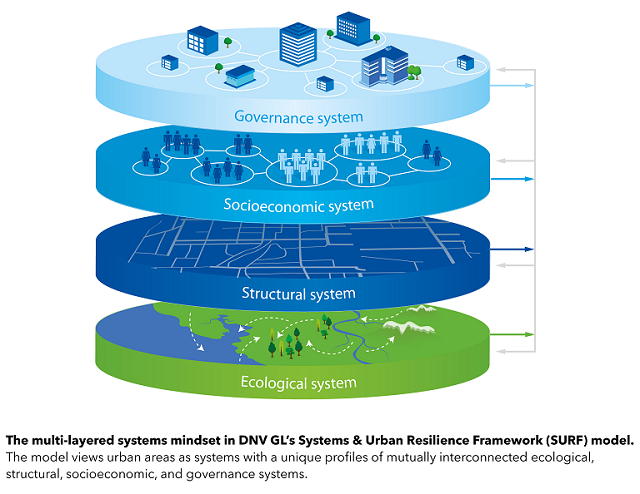 Some cities need to cope with slow-onset stresses like rising sea levels and drought, while others are under increased threat of sudden shocks, such as increased flooding, stronger cyclones, or extreme heat.

To illustrate SURF’s potential, three case studies are used: the rising sea level in San Francisco Bay, flooding in Thailand, and disruptive rainfall events in Amsterdam. By simulating the interrelated effects that sea level rise might have on the San Francisco Bay Area, the studies show policies that intend to minimize financial cost to the region (such as building defensive levees) could increase long-term costs. In the Bangkok case study, the use of a data-driven watershed management simulator acts as a ‘learning laboratory’ for alternative future climate scenarios.

The position paper is available here. 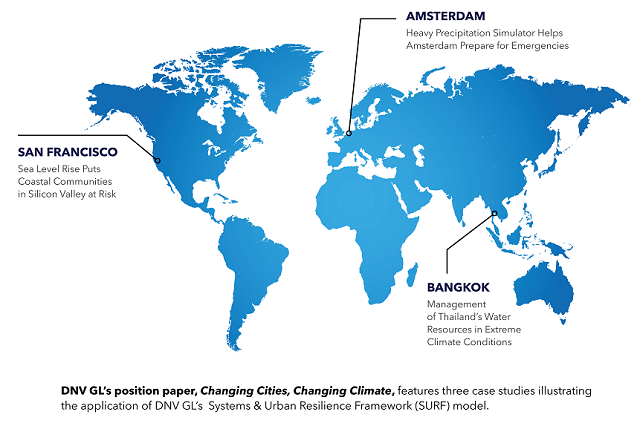