In April 2017, Qatar lifted the North Field natural gas production moratorium that had been in place since 2005. This will allow Qatargas to increase production from the world’s largest gas field and export more LNG. The company has plans to build three new liquefaction trains with a total capacity of 23.4 Mt. This would lift the country’s total export capacity to 100 Mt, and increase of over 30 percent.

The expansion comes at a time when there are several liquefaction trains in the U.S. ready to take FID. The Qatari project represents a challenge for these projects, as it is estimated that it has the lowest breakeven price of all the planned projects in the world. Rystad Energy estimates that the breakeven price for the Qatari brownfield expansion would be around $5.60 per MMBtu (including transport to Asia), which is around 34 percent below the breakeven price of the more competitive U.S. projects. 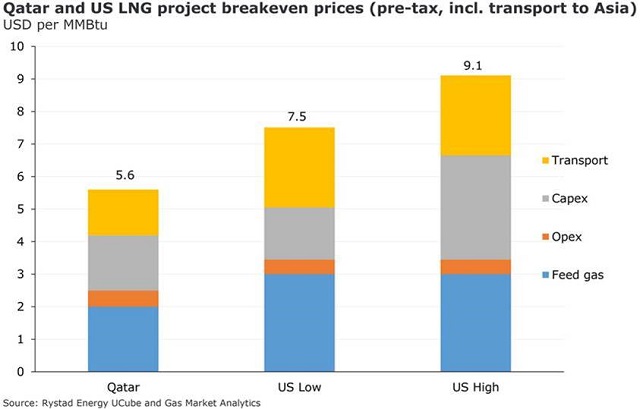 Breakeven prices for the U.S. projects are estimated to be between $7.50 and $9.10 per MMBtu (including transport to Asia). The main reasons for the Qatari project being more competitive are that natural gas production costs are below other regions and its proximity to Asian markets.

Qatargas signed a front-end engineering design (FEED) contract earlier this year sending a clear signal that they will go ahead with the development of the new trains. They have not yet disclosed the signing of long-term supply agreements with potential buyers, however, Chinese buyers could be especially interested in signing new agreements with Qatar since exports from the U.S. could eventually be subject to tariffs if the trade war between China and the U.S. continues to escalate.

Rystad Energy forecasts that at least 56 Mt of new LNG supplies will be needed by 2025. If Qatar goes ahead with the commissioning of the new trains, the volumes could come online by the start of 2023 (considering four years of project development), thus an additional 33 Mt of capacity would still be needed by 2025 to keep the market balanced. 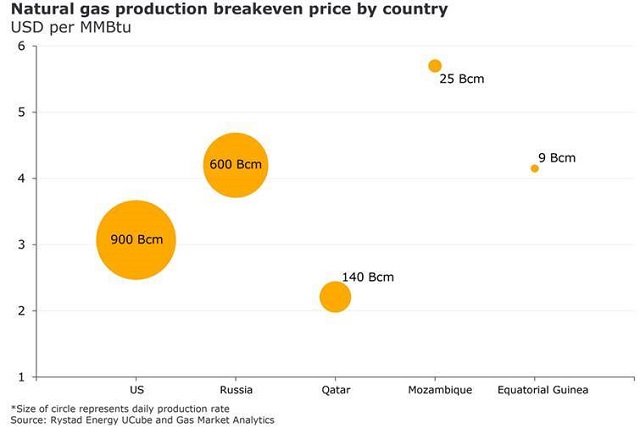 There are several projects awaiting FID in the U.S. such as Sabine Pass Train 6, Delfin, Driftwood, Rio Grande and Texas LNG. Additionally, there are projects in other regions such as Mozambique LNG and Fortuna FLNG that have advanced negotiations. These projects could add the required additional capacity but would need to start their development by 2020 to avoid a supply shortage as demand continues to grow. On the other hand, there is a risk that too many projects take FID, leading to a loose market with depressed prices after 2020.

Many of the planned projects have not secured project financing since the developers need to sign long-term supply agreements that can guarantee they can meet their financial obligations.

With the current tight LNG market driven by strong Asian demand and Asian Spot prices trading above $10 per MMBtu in the summer (a period when prices should theoretically drop), buyers could be more willing to sign new long-term supply agreements at the $8 per MMBtu level required to take the U.S. projects forward.

Overall, Rystad Energy expects Qatargas to take FID within 2018 or early 2019. The additional 33 Mt will have to come from the U.S. and other international plants but developers need to avoid a race that could potentially create a supply glut.