A group of environmental activists took to the streets in Germany and disrupted traffic for much of the day on Monday at the Port of Hamburg to call attention to their demands. Saying that the federal government has not responded to their group’s ultimatum, the demonstrators calling themselves “Last Generation” promised to continue to blockade the port and disrupt the flow of goods there and elsewhere in Germany until the government addresses the issues of food waste that they say is contributing to the climate crisis.

Last Generation issued an open letter to the federal government on February 16 demanding a response by Sunday or promising to disrupt Hamburg and other centers of commerce across Germany. Saying that they had not received to reaction from the government, the protestors calling themselves supporters of the “Save Food – Save Lives” campaign began at 7:30 a.m. blockading two of the main bridges and roads into and out of the port.

“Hamburg is the scene of destruction. Its harbor shows the deadly industrial business as usual, while the effects of the climate crisis will soon be evident here. The government must enlighten the residents that life as we know it today will no longer exist here at the end of this century! Storms and floods today are showing us how increasing extreme weather events will devastate our city,” said Carla Hinrichs, Public Secretary of the Last Generation while blockading the port.

Saying that they wanted to cause as much disruption as possible, the protestors used superglue to attach their hands to the pavement as well as banners and also used construction foam. The protestors also spilled 60 liters of rapeseed oil onto the street, saying that they had first warned the police of their intentions. The streets remained blocked for much of the day, while other protestors from the group also blocked roads in Stuttgart and Freiburg. 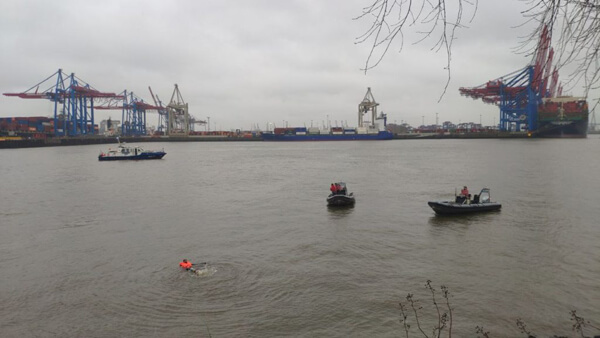 During the day, protestors also took to the waters of Hamburg harbor seeking to disrupt the movement of ships. Several of the protestors put on life jackets and started swimming in the harbor. The police responded in speed boats demanding that the protestors leave the harbor. When they refused, they were pulled from the water. The police continued to search the harbor and circled overhead in helicopters looking for additional protestors.

Among their demands is an immediate end to food waste. The group argues that throwing away vast amounts of usable food contributes to hunger and climate change. Carla Rochel of the group said that “I am sitting here on the street because our federal government is still doing nothing to save our food. A third of our food ends up in the bin every day.” They argue that a 3-degree hotter world means at least a fifth less harvests worldwide due to heat waves, floods and storms, while predicting that exploding food prices are an inevitable part of climate change.

The police arrested the first wave of protestors blocking the access roads to the port of Hamburg but around 5:00 p.m. a second group took to the streets again blocking traffic. After disrupting traffic for a second time, three women from the group, Carla Rochel age 20, Lina Eichler age 19, and Katrin Hack age 26, spent the night in jail. They appeared before a local magistrate and were released after almost 20 hours.  An additional 11 protestors were also arrested in Nuremberg.

After being released, the protestors in Hamburg said they were willing to accept the consequences for their actions and promised additional demonstrations that would again blockade the port of Hamburg until the government responds to their demands.