Two leading shipping companies both reported that they are moving forward with efforts to develop some of the maritime industry’s first ammonia bunker vessels. With the industry continuing to highlight the potential of ammonia to become one of the leader alternative fuels the challenge continues to build the infrastructure to support it as a marine fuel while addressing the unique challenges, including the toxicity of ammonia.

In Japan, NYK became the first shipping company to receive approval in principle (AiP) from ClassNK for an ammonia bunkering vessel. NYK reports that it is making progress in the research and design of the bunker vessel to meet the anticipated needs of the marine fuel industry. The company said the bunker vessel that received this AiP is scheduled to be used for ammonia bunkering, which NYK expects to become more common in the late 2020s.

NYK said its Project Engineering Team launched just a year ago was in charge of creating the various drawings necessary to obtain the AiP from ClassNK. The team created its own design drawings instead of relying based on those that had previously been made by shipyards and design companies and used an advanced method of creating 3D models linked to the drawings in the initial conceptual design stage. The advanced use of 3D modeling enabled more in-depth discussions to take place about risk assessments of hazardous locations and escape routes during the HAZID (Hazard Identification Study) and allowed for specifications that incorporate sufficient safety measures against the toxicity and corrosiveness of ammonia. 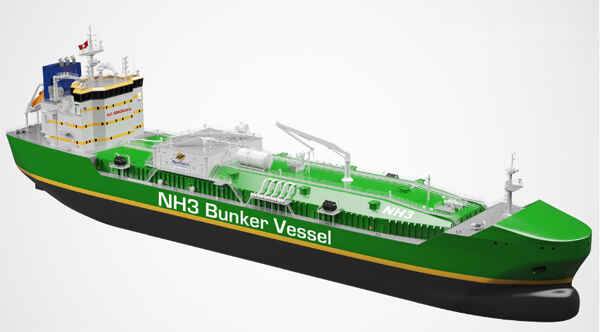 Italy’s Fratelli Cosulich also reports that it is making progress as part of a joint development project launched in November 2021 with Italian class society RINA and Singapore-based engineering firm SeaTech Solutions to develop an ammonia bunker tanker design. SeaTech is focusing on the ship concept development and design while RINA is verifying compliance with the applicable rules, particularly those related to the handling of ammonia. Fratelli Cosulich Bunkers Singapore provided the operational data to support and validate the suitability of the ship design for commercial operations.

Demonstrating Fratelli Cosulich’s intentions to move forward with ammonia bunkering to meet the future needs of the maritime industry, the company reports it has now signed a Memorandum of Understanding with Nantong CIMC Sinopacific Offshore & Engineering for the construction of an ammonia bunker tanker. They expect to draw on the experienced developed in an earlier project to design two LNG bunker vessels that are now under construction for Fratelli Cosulich at the shipyard in China.