China is preparing to launch its second domestic cruise operation with a newly acquired large cruise ship. The handover of the former Sea Princess of Carnival Corporation’s Princess Cruises was completed this week in Manila.

Introduced in 1998, the Sea Princess was built by Fincantieri for Princess Cruises. The 77,500 gross ton cruise ship sailed for Princess and briefly for P&O Cruises and had been operating mostly in Australia before being idled by the pandemic. In September, Princess Cruises announced that they were selling the ship along with her sister ship the Sun Princess. Buyers for the Sea Princess had not been announced while the Sun Princess will be operated for the Japanese NGO Peace Boat starting in 2021 as the Pacific World.

V.Ships Leisure announced that they had assisted with the handover of the Sea Princess to its new Chinese owners, Sanya International Cruise Development Co., Ltd. The handover was mostly completed via a remote process. V.Ships provided an electronic safety management system and other services to aid with the handover and management of the cruise ship.

V.Ships Leisure and its sister hospitality company Oceanic Catering have been selected by Sanya for ship and hotel management of the former Sea Princess which is being renamed Charming. The 2,222 berth vessel is expected to begin sailing in 2021. V.Ships has also been handling the crewing and hotel management for China’s first large cruise ship, the Piano Land. 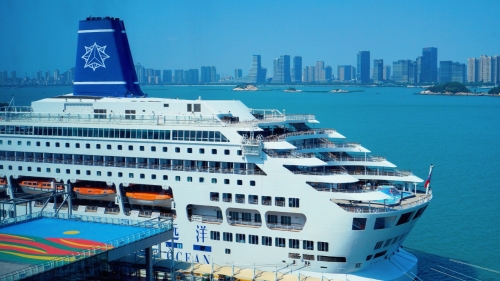 “Being selected once again to manage the start-up of a cruise line in China highlights our unique capability to manage vessels locally with our highly experienced cruise dedicated team in China,” commented Per Bjornsen, CEO V.Ships Leisure. “Our integrated ship and hotel management partnership model is proving ever more popular as it enables delivery of a unified ship and shore side approach to safety culture and Covid-19 secure operations.”

China is reportedly anxious to restore its cruise and travel operations after the pandemic. Recently, it was reported that the government approved the re-starting of the cruise operations aboard the Piano Land, although the ship appears to still be idle in Xiamen. Genting Hong Kong was also in discussions with the Chinese about launching a joint venture cruise operation to base a ship in Hainan.

Sanya International Cruise Development Co. is funded by CCCC Ocean Investment Holding Company Limited, part of the China Communications Construction Company. In 2016, they announced their intention to acquire between five and eight cruise ships to build China’s domestic cruise industry. This was seen as a response to the success the western companies were having developing China’s cruise market.

Before the pandemic, China had been the fastest-growing market for the cruise industry, although growth was wavering and some of the largest cruise lines had announced plans to redeploy some ships to other markets. Longer term, analysts still expect that China will grow to become one of the world’s largest cruise markets.