Two of America’s ports are among the 20 projects that the U.S. Department of Transportation (DOT) plans to support in an ongoing effort to revitalize America’s infrastructure.  The ports of Houston and Tampa Bay will both be receiving grants from a total of $900 million in planned grants through the Infrastructure for Rebuilding America (INFRA) discretionary grant program.

DOT evaluated 173 eligible applications from 47 states, as well as U.S. territories and the District of Columbia, who collectively requested approximately $7.4 billion in grant funds—more than eight times the funding available.

While the majority of the awards are going to road projects across the United States, two ports will also benefit from the grants.

The Port Houston will receive nearly $80 million toward it’s a $198 million project to restore and improve wharf and yard space at its Barbours Cut Container Terminal.  The restoration and upgrades are needed according to the Port of Houston to handle the current and future demand of cargo calling at Barbours Cut. The project also provides environmental benefits and emissions reduction. 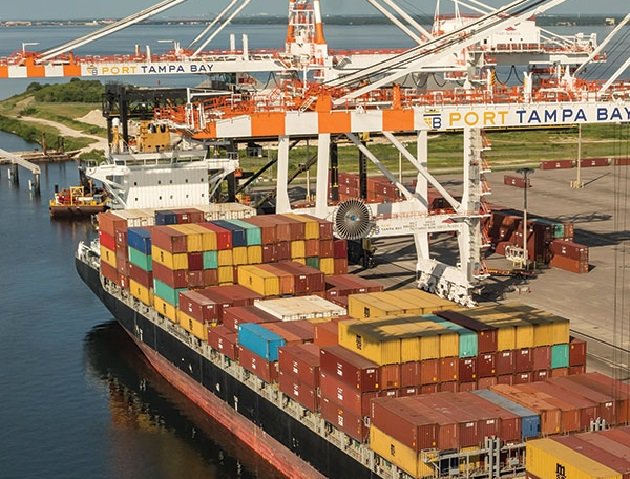 Port Tampa Bay will receive a $19.8 million grant to expand its container complex.  The Berth 214 project is an intermodal effort to connect cargo that arrives by ship to road or rail.

According to Port Tampa Bay, with this INFRA grant, the port will work to meet existing market demand by expediting construction of a new, 1,300-foot-long berth and a 30-acre container yard.

Port Tampa Bay has seen strong growth in its containerized cargo business recently, and this project will be used to expand the port’s container capacity by 60 percent, increase the number of deep draft container vessels the port can receive, improve efficiency with a state-of-the-art truck gate, and improve rail access.

As required under the FAST Act, Congress will have 60 days to review the Department’s proposed project awardees under the INFRA program. After the 60-day review period, DOT can begin providing the funding.

The America’s Marine Highway Program promotes the increased use of the Nation’s navigable waterways to ensure landside congestion relief, new and efficient transportation options and increased performance of the surface transportation system.