The German polar research vessel Polarstern left her homeport in Bremerhaven on August 10 on a first preparatory leg of the one-year Multidisciplinary drifting Observatory for the Study of Arctic Climate (MOSAic) Expedition.

Polarstern will be prepared for the expedition in the Norwegian port of Tromsø and is expected to depart for the Central Arctic on September 20. The 118-meter (387-foot) vessel will spend the next year drifting through the Arctic Ocean, trapped in the ice. 600 people from 17 countries will be supplied by other icebreakers and aircraft, to participate in the expedition – and several times that number of researchers will subsequently use the data gathered. The $150 million project will be led by Germany's Alfred Wegener Institute, Helmholtz Centre for Polar and Marine Research (AWI).

The vessel will drift towards the North Pole from the Fram Strait between Greenland and Svalbard, using the natural transpolar drift of the sea ice. The plan is to drift roughly seven kilometers per day, ending the trip in October 2020 near Greenland. By drifting with the ice, MOSAiC scientists will observe the atmospheric and oceanic processes that affect the sea-ice as it evolves from new first year ice to multi-year ice and eventually towards the decay stage as the ice approaches the North Atlantic sector. As such, MOSAiC will observe the full annual cycle of the sea ice. 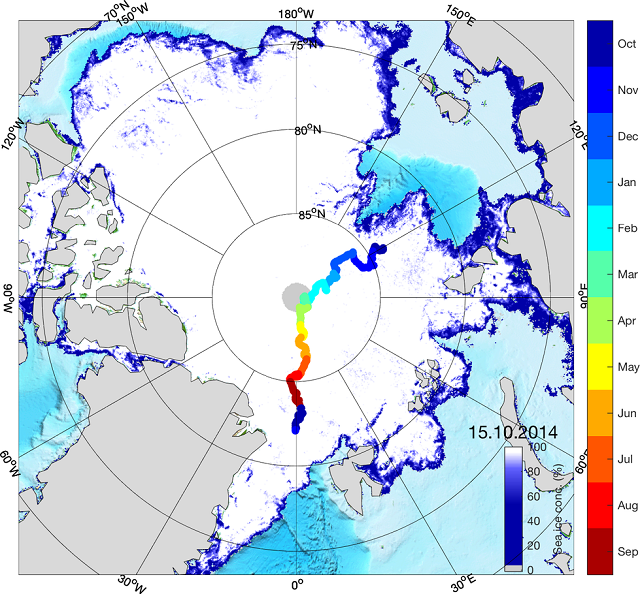 Data gathered from the MOSAiC mission will be used to update mathematical climate models, and researchers will focus on understanding the causes and consequences of an evolving and diminished Arctic sea ice cover:

1. What are the seasonally-varying energy sources, mixing processes, and interfacial fluxes that affect the heat and momentum budgets of sea ice?

2. How does sea ice move and deform over its first year of existence?

3. Which processes contribute to the formation, properties, precipitation, and maintenance of Arctic clouds and their interactions with aerosols and boundary-layer structure?

4. How do inter-facial exchange rates, biology, and chemistry couple to regulate ecosystems and the major elemental cycles in the high Arctic sea ice?

5. How do ongoing changes in the Arctic ice-ocean-atmosphere system impact larger-scale heat and mass transfers of importance to climate and ecosystems?

Commissioned in 1982, Polarstern is one of the most advanced and versatile polar research ships in the world. She operates an average of 310 days a year, typically cruising in the Antarctic from November to March and pursuing research in the Arctic during the summer months. In the process, she covers around 50,000 nautical miles every year – the equivalent of two trips around the Equator. Her double hull and 20,000 horsepower allow her to easily break through 1.5-meter-thick ice; thicker ice can be overcome by ramming. She is equipped for sustained operations at temperatures down to -50 degrees Celsius. 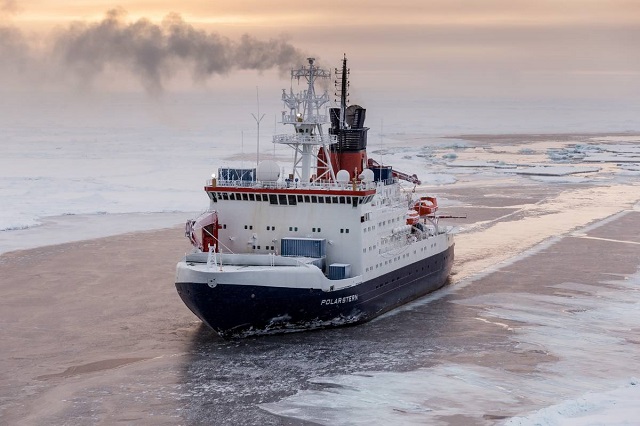 Early in the voyage, the vessel will sail to the AWI’s Hausgarten observatory in the Fram Strait, where experts from various disciplines are investigating all aspects of the ecosystem, from the water’s surface to the ocean depths, in order to determine the impacts of climate change on biodiversity in the Arctic. Here 21 permanent stations covering a water depth range of 250 to 5,500 meters (820 to 18,000 feet) are deployed. Various platforms have been used to take samples from the stations since 1999. At regular intervals, a Remotely Operated Vehicle (ROV) named Paul is used for targeted sampling, the positioning and servicing of autonomous measuring instruments and the performance of in situ experiments. A 3,000-meter (9,800-foot) depth-rated Autonomous Underwater Vehicle (AUV) allows the sensing and sampling in the water column as well as large-scale observations at the seafloor.

This year, Paul is slated to dive to the ocean floor. In previous expeditions, it remained in the upper water layers. Equipped with a camera and side-scan sonar, its task is to map the seafloor in high resolution. At depths of up to 2,600 meters, Paul will hover five meters above the seafloor, recording its characteristics at a resolution of around 10 to 15 centimeters (around five inches). These maps will then provide the basis for determining the sample collection sites for a multicorer, a device that extracts samples from the sediment for microbiological testing.

For the third time, the AWI’s crawler Tramper will be used to explore the Arctic seafloor, measuring, for example, oxygen consumption as an indicator of microbiological activity. Tramper will be supported by a second crawler named Nomad which was successfully tested at the deep-sea observatory in 2018. This time, the two robots will be equipped to stay on site for a two-year operation, since Polarstern won’t be available for an expedition to the Hausgarten next year as she will still be drifting through the ice.