On Wednesday night, the U.S. Coast Guard answered an EPIRB distress signal and rescued a man and woman from a capsized sailboat about 65 miles off Atlantic City, New Jersey.

Watchstanders at the Coast Guard’s Fifth District Command Center in Portsmouth, Virginia received notice of the vessel's EPIRB signal on Wednesday. They reached out to the emergency contact listed on the EPIRB's registration, and the contact person reported that the sailboat - a 55-foot wooden-hulled vessel named Bertie - was under way from the Bahamas to New York City. The vessel's owners were on the last leg of a round-the-world voyage.

The vessel was outside of range for VHF and cell reception, so watchstanders diverted the cutter Lawrence Lawson to the location of the distress signal. They also dispatched a helicopter crew out of Air Station Atlantic City and an HC-130 Hercules out of Air Station Elizabeth City.

“When our helicopter arrived on-scene, the crew followed a blinking strobe light and discovered a man and a woman clinging to the hull of their capsized sailboat,” said Lt. Tyler Bittner, the operations duty officer in Atlantic City. Both sailors were hoisted aboard the MH-65 Dolphin helicopter and brought back to Air Station Atlantic City, where they were met by awaiting EMS. 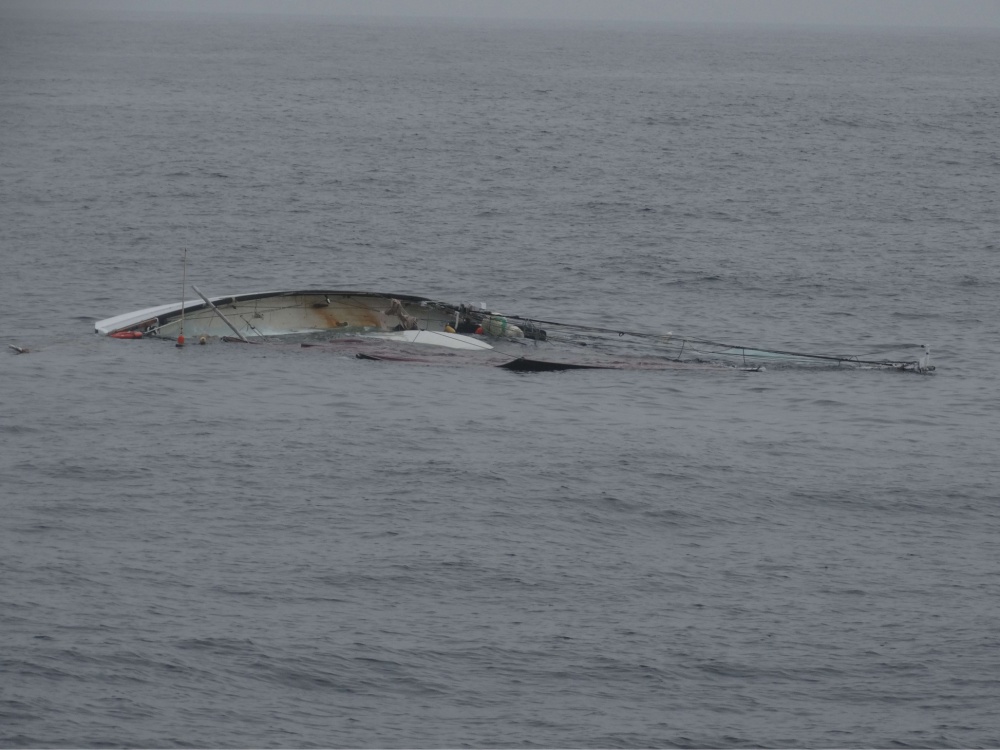 The crew of the FRC Lawrence Lawson approaches the capsized sailboat, May 29, 2019 (USCG)

The cutter Lawrence Lawson remained on scene to mark the sailboat and attempt to recover the EPIRB.

“This was an extremely challenging hoist due to on-scene conditions, but the entire crew came together to work as a team to get the job done,” said Lt. Anthony Monteforte, one of the helicopter pilots. “I am extremely proud of my crew and all of the other assets that aided in this rescue and thankful that the survivors onboard used a currently registered EPIRB so that we could quickly locate them.”