Over $15 Billion in Cargo Moved on St. Lawrence Seaway

The Saint Lawrence Seaway Development Corporation has released its 2018 study of the economic impacts of shipping in the Great Lakes-St. Lawrence region highlighting that cargo moved in 2017 totaled 143.5 million tons and was valued at $15.2 billion (C$19.8 billion).

The Soo Locks, which connect Lake Superior with the lower four Great Lakes, supported 123,172 jobs in the U.S. and Canada and $22.6 billion (C$29.3 billion) in economic activity.

First released in 2011, the study at that time found that maritime commerce along this waterway supported 227,000 jobs; contributed $14.1 billion in annual personal income, $33.5 billion in business revenue, $6.4 billion in local purchases and added $4.6 billion to federal, state/provincial, and local tax revenues. 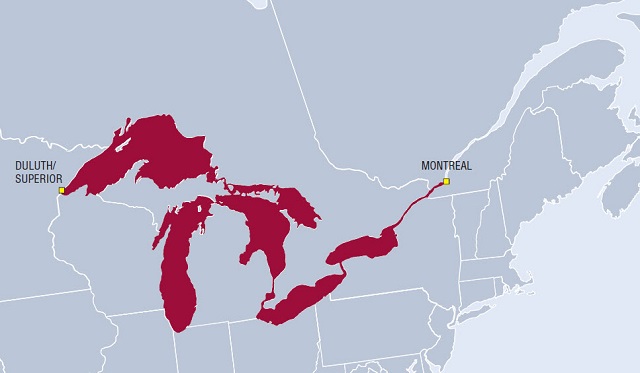 The Great Lakes-St. Lawrence Seaway (comprised of the five Great Lakes – Superior, Michigan, Huron, Erie and Ontario – their connecting channels and the St. Lawrence River) serves the industrial and agricultural heartland of the US and Canada. If the region was its own country, it would be the 3rd largest economy in the world with a combined GDP of more than $6 trillion dollars. The St. Lawrence Seaway is also the longest deep draft navigation system in the world, extending 2,300 miles from its westernmost point in Duluth, Minnesota to the Atlantic Ocean.

The Seaway extends from Montreal to Lake Erie and is composed of a series of 15 consecutive locks that connect the Great Lakes to the lower St. Lawrence River and the Atlantic Ocean. The Welland Canal section consists of eight Canadian locks that enable ships to pass between Lakes Erie and Ontario, bypassing the Niagara Falls. The Montreal-Lake Ontario section of the Seaway consists of seven locks — five located in Canada and two in the U.S. These locks enable ships to pass between Lake Ontario and the lower St. Lawrence River.

Over the last 200 years, navigation improvements in both the U.S. and Canada have enhanced the waterway. The resulting deep-draft inland navigation system is the longest in the world, extending 3,700 kilometers (2,300 miles) into the North American heartland.