The oldest and thickest Arctic sea ice is disappearing twice as fast as ice in the rest of the Arctic Ocean, according to a new study in the journal Geophysical Research Letters.

Ice in the Arctic Ocean north of Greenland is more mobile than previously thought, as ocean currents and atmospheric winds are likely transporting the old, thick ice found there to other parts of the Arctic. As a result, ice mass in the area – the last place researchers think will lose its year-round ice cover – is declining twice as fast as ice in the rest of the Arctic, according to the new findings.

Most ice covering the Arctic is only one to four years old, according to the National Snow and Ice Data Center. As thin, young ice melts in future summers, only a 2,000-kilometer (1,240-mile) arc of ice will remain, stretching from the western Canadian Arctic Archipelago to Greenland’s northern coast. In this slice of the Arctic, which experts call the Last Ice Area, sea ice is more than five years old and can measure more than four meters (13 feet) thick.

The new research suggests the Last Ice Area is a dynamic place encompassing two sub-regions where ice thickness fluctuates by 1.2 meters (four feet) from year to year. Ice is becoming thinner in two distinct sub-regions, which are losing 0.4 meters (1.3 feet) of ice thickness per decade, amounting to a 1.5-meter (five foot) loss of ice since the late 1970s, according to the new study.

For wildlife who rely on sea ice for survival, the Last Ice Area offers a sanctuary and is the final place they can retreat to in a warming world. Understanding how the Last Ice Area changes throughout the year could help pinpoint which spots are best suited to provide a refuge for wildlife who are dependent on sea ice. Places with less ice movement, for example, may provide more suitable conditions for a wildlife sanctuary, as the ice will remain longer.

The Last Ice Area is home to the Arctic’s oldest and thickest ice because ocean currents and atmospheric winds carry patches of floating ice in a circular pattern. These blocks of ice crash into each other and pile up along the northern edges of Greenland and Canada. Researchers, however, know little about how ice in this region moves and melts during the year. In the new study, the team modeled sea ice cover, thickness and motion across the zone from 1979 to 2018. Their model, based on satellite observations and atmospheric data, revealed two regions with distinct seasonal and inter-annual fluctuations – one to the east and one to the west. 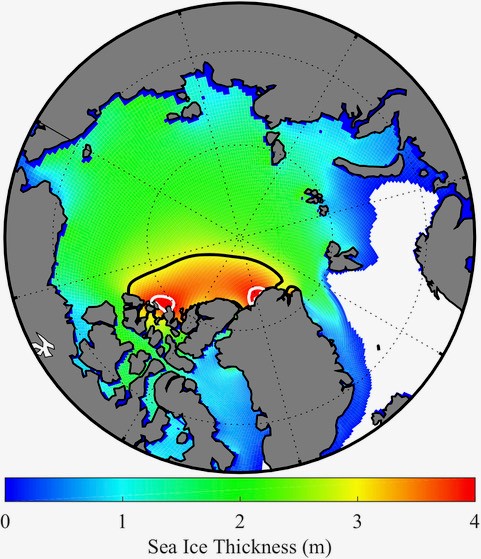