Japanese shipowner NYK and ocean carrier network ONE have launched a trial operation for the long distance transportation of hydrogen gas via a novel liquid chemical method.

The process, which was developed and operationalized by chemical engineering company Chiyoda, is called the organic chemical hydride method. In the supply country, hydrogen and toluene are converted into methylcyclohexane (MCH), a liquid at ambient temperature and pressure, through a hydrogenation reaction. In the importing country, the hydrogen is extracted from the MCH through a dehydrogenation reaction, then supplied to consumers as hydrogen gas. At no point is the hydrogen chilled and liquefied for shipment. 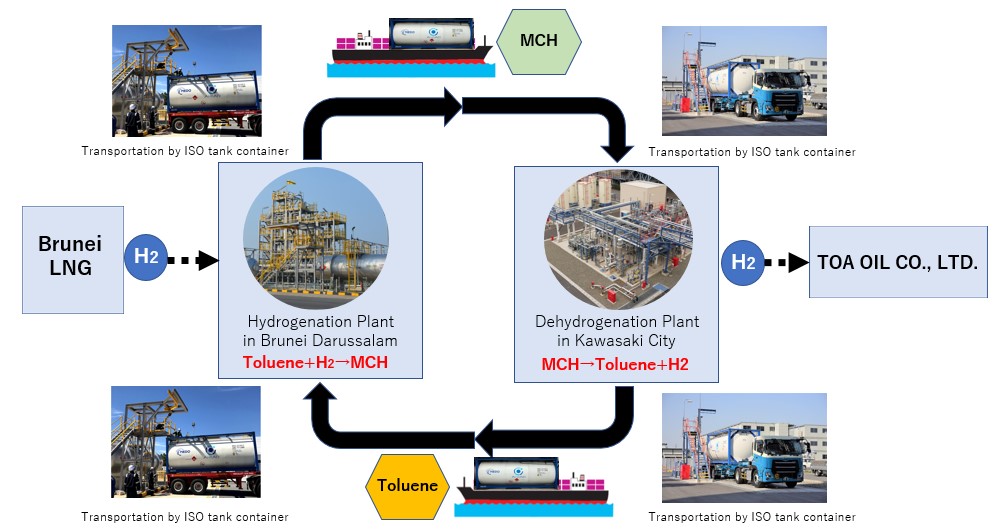 Methylcyclohexane (MCH) produced at a plant in Brunei Darussalam has already been transported to Japan in an ISO container aboard an NYK-operated ship. The MCH test cargo was separated into hydrogen and toluene at a dehydrogenation plant located on the Kawasaki waterfront, and the hydrogen was supplied to a gas turbine generator at the Mizue power station.

The toluene separated by dehydrogenation was transported from Japan to back to Brunei Darussalam, and it will be hydrogenated again to complete the supply cycle.

The trial system's capacity is about 210 tons of hydrogen per year at full operation - equivalent to fully filling the tanks of about 40,000 hydrogen fuel cell vehicles, according to NYK. The demonstration project is scheduled to conclude this December.

NYK's partners in the project include Mitsubishi, Chiyoda, Toa Oil Co. and MOL.