Open hatches on the back deck of a harbor tug led to its sinking off the coast of Puerto Rico in 2020, according to the NTSB. A post-casualty inspection of the vessel revealed that its hatches could not be sealed and that there were multiple penetrations through its watertight bulkheads belowdecks.

The 1949-built tug Proassist III provided ship assist services at both Puerto Yabucoa and Laguna de las Mareas, and made the short coastwise voyage between the two ports about 3-11 times per month. She was originally built as an inland towboat and was converted for harbor service with the addition of a low bulwark, ranging from 16 inches high amidships to 32 inches at the stern.

On Christmas Eve, 2020, the Proassist III was in Laguna de las Mareas Harbor, providing ship assist services for a merchant vessel. The job finished up at about 1400 hours, and the three-person crew prepared to get way to Puerto Yabucoa. The tug's first deckhand also served as the engineer, and he went aft to check on the water level in one of the boat's two rudder compartments, the steering rudder compartment. He opened the flush-deck hatch to the compartment and found that the water level in the bilge was typical for the aging tug's everyday operations, with about 15 gallons of water.

At 1640 hours, the second deckhand noticed that the stern appeared to be "riding a little low." Together, the two deckhands checked the tug's flanking rudder compartment and found three feet of water in the bilge. They informed the captain and brought out an emergency dewatering pump. Initially the pump worked, but a wave washed over the bulwark, striking the pump and disabling it. As the weather conditions deteriorated further, the crewmembers retreated to the bridge.

At 1742, the master of the Proassist III decided to abandon ship. He made a distress call to the Coast Guard, called the vessel's owner by cell phone to inform him of the situation, and launched the vessel's inflatable life raft. The raft's auto-inflation system worked and partially inflated the raft, but it failed to break the sealing straps of the canister. The master did not have a knife on him to cut the straps, so he went back into the vessel to find one. Once he had located a knife, he jumped into the water next to the canister and cut the straps so that the raft could fully deploy.

Before abandoning ship, he attempted to move the tug closer to shore, since the engines were still running; however, he found that the rudders were jammed to starboard, possibly because flooding in the rudder compartments had shorted out the power to the steering motors.

At about 1830 hours, a small fishing boat responded to a Coast Guard marine safety alert and came to the Proassist III's aid. All three crewmembers abandoned ship and were rescued by the fishing boat. About 10 minutes later, the Proassist III sank by the stern in 30 feet of water, about 450 yards off the coast.

The postcasualty examination of the vessel showed that none of the flush-deck hatches had bolts or dogs to hold them in place. They were missing gasket material, and the hatch frames were corroded. "Water on deck would have seeped through the hatch seals into the compartments below," NTSB concluded.

In addition, the agency's investigators suggested that the crew may have departed port with an open hatch, since the crew rarely experienced conditions in which waves washed over the stern. The post-accident dive inspection found one hatch removed for the emergency pumping operation, one hatch lid slightly ajar, one upside down, and none secured. 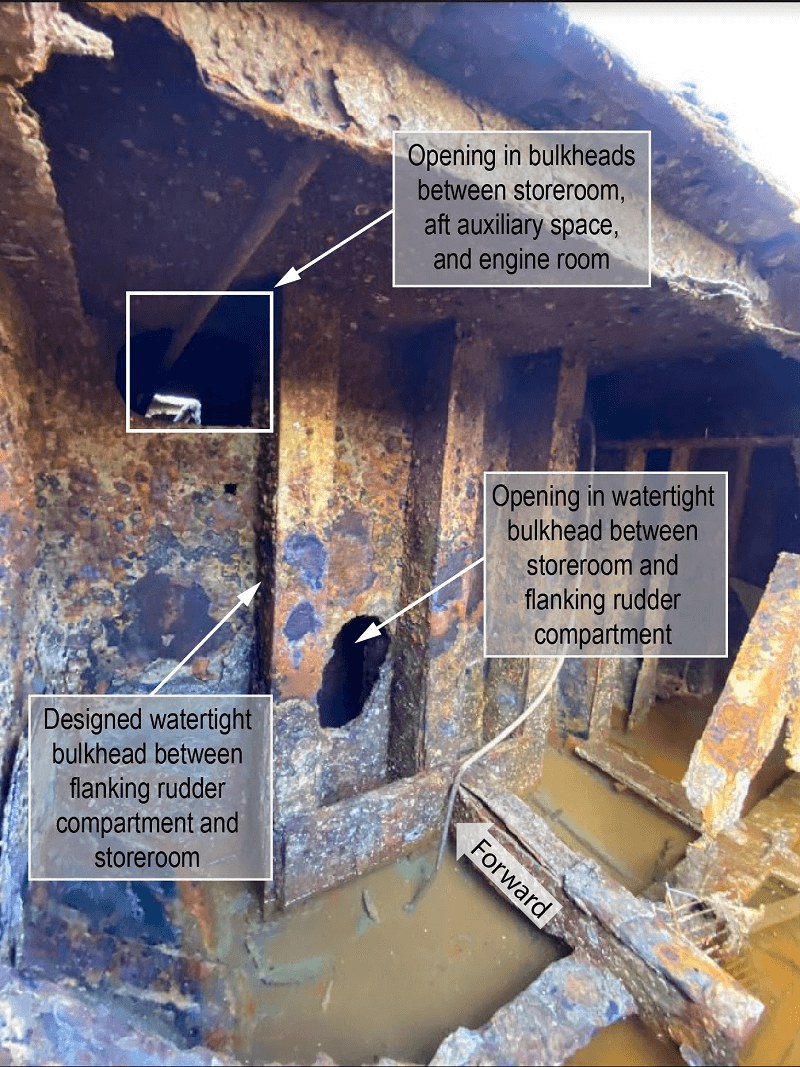 Once water entered the steering compartments, progressive flooding would have occurred through the ample penetrations in the bulkheads. As the watertight doors on the deckhouse were also lacking gasket material and dogs, downflooding would have happened relatively quickly once water reached the deck level, even if they had been sealed. (The dive inspection found them open.)

An earlier inspection ordered by the tug's owner found a list of 80 deficiencies which would have had to be fixed to meet Subchapter M compliance, including issues with the tug's hatches. The owner produced no evidence for NTSB that these deficiencies had been corrected. However, the tug's deadline for compliance with Subchapter M was in 2021, seven months after it went down.

"The watertight and structural integrity deficiencies in the postcasualty examination of the Proassist III indicate that the vessel was not adequately maintained," concluded NTSB. "Additionally, as a result of the Coast Guard’s Concentrated Inspection Campaign after the casualty, hull and deck integrity issues were identified on three of the Proassist III owner’s other vessels, indicating that the company did not have an effective maintenance program."