Several NGOs operating rescue operations in the Mediterranean are accusing oil industry giant Shell and the government of Malta of a failure to properly safeguard approximately 70 refugees who had sought refuge in bad weather at a Shell-operated oil platform in the Mediterranean. The refugees were removed from the platform by a Tunisian naval vessel and according to the NGOs are being returned to unsafe circumstances in Africa.

The current incident began on January 3 when the NGO Sea-Watch International, which also operates a reconnaissance airplane Seabird, spotted a group of approximately 100 refugees in distress in the Mediterranean with weather conditions worsening. This latest report came after a particularly busy period during the days between Christmas and New Year holidays when three NGO vessels reported rescuing over 1,100 people in the western Mediterranean attempting the crossing from Libya primarily heading toward Italy and Malta.

The Seabird issued a warning and was able to coordinate with a German NGO Louise Michel which dispatched its “homemade emergency vehicle,” a former French Navy boat operating under the same name to the scene. The vessel, which is 98 feet long and capable of up to 28 knots, has become famous in part because she is painted bright pink and because funding from the operation came from the sale of artworks by the elusive British artist Banksy. The artist also supplied work that decorates the exterior of the rescue vessel. 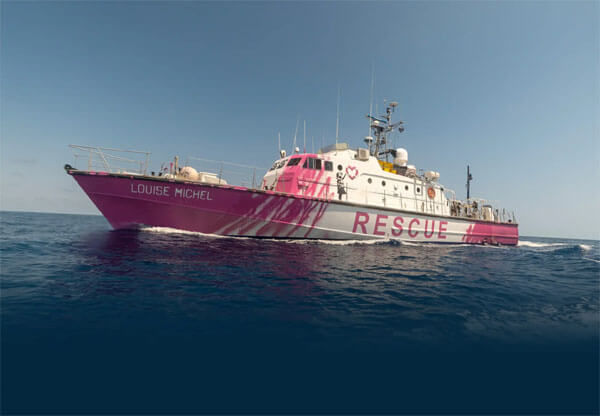 The crew of activists and volunteers aboard the Louise Michel reached the area near the Shell oil platform and began bringing the refugees aboard. They were able to get 31 people aboard, but an additional 70 scrambled toward Shell’s Miska oil platform for safety.

A spokesperson for the oil company confirmed, “On January 3 at 8 pm (Tunis time), a boat carrying people reached our platform. They were assisted and provided water, food, and dry clothes.”

Fourteen hours later, Louise Michel Tweeted an update saying that the people remained on the platform and urgently needed a safe place. They were calling on the Maltese authorities to provide immediate shelter for the 100 refugees.

Our #Seabird reached the MISKAR platform at noon today. The @MVLouiseMichel observed people being transferred to a Tunisian warship. Once again, Malta denied its duty to provide a port of safety for a distress case in its SAR zone. https://t.co/Mp11R14g8m pic.twitter.com/PgvEPBg4Ul

Shortly after issuing that update, a Tunisian warship arrived at the oil platform, confirmed in messages and photos from the NGOs. Shell also reported, “Shell had informed the Tunisian authorities and worked closely with them to ensure the safety of the people on board the boat. They have since been safely transferred to the Tunisian navy vessel.”

The NGOs remain incensed at Shell and the Maltese authorities for the failure to protect the individuals and sending them back to Africa where they content their lives will be in danger after the failed escape effort.

2021 saw a dramatic increase in the numbers of people attempting the Mediterranean crossing from northern Africa. A report on asylum rights by the Migrants Foundation of the Italian Episcopal Conference released in November estimated that "about 56,700 refugees and migrants managed to arrive in Italy or Malta using the central Mediterranean route,” since the start of the year.

The UN’s International Organization for Migration however says that an additional number set at over 32,400 people were intercepted at sea and returned to Libya in 2021. The NGOs estimate that the number of interceptions in the central Mediterranean last year almost tripled compared to 2020.