The NGO SOS Mediterranee is appealing to the European Union to intervene to assist in arranging for a safe port for its rescue vessel, which is heavily loaded with migrants saved in the past few days in a series of operations in the Mediterranean. At sea for just over a week, the organization says the offshore tug/supply ship that it is using for its rescue operations now has 572 survivors aboard and is not receiving a coordinated maritime response to deal with the large number of people requiring urgent assistance.

A 35-year-old-vessel, the Ocean Viking is a 2,600 dwt tug registered in Norway. The vessel, which was not designed to accommodate nearly 600 rescued individuals, is at sea in the central Mediterranean urgently seeking a safe port. According to the vessel’s online log, on July 2, the Ocean Viking requests a Place of Safety when it had just 44 survivors on board. Since then, it has undertaken several large rescue operations. According to the vessel, it has been keeping the maritime authorities informed of its rescue operations, and on July 4 and again on July 5 requested a Place of Safety, for the people on board but received no directions from the authorities. 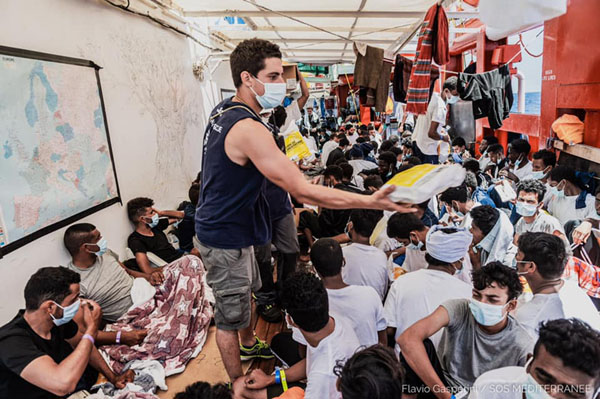 Amid the absence of maritime coordination, SOS Mediterranee is now calling on the EU to urgently coordinate for the survivors to disembark in a Place of Safety, the charity said in its public statements.

“What we have witnessed at sea these past days is harrowing,” says Luisa Albera, search and rescue coordinator for SOS Mediterranee onboard the Ocean Viking. “Not only did we happen to rescue hundreds of people, who took the risk of dying at sea rather than staying in Libya, without any coordination by maritime authorities, but we also witnessed remains of other boats which were intercepted by the Libyan Coast Guard, even as far as in the Maltese Search and Rescue region. All those intercepted are being forcibly and unlawfully returned to Libya, which cannot be considered a Place of Safety according to maritime law. We are calling upon the EU to now at least coordinate for the disembarkation of 572 survivors, currently aboard our ship, in a Place of Safety.”

The organization reports it has rescued over 31,000 people from the central Mediterranean since its operations began in 2016. The most recent mission began on June 27 when the vessel sailed from Marseille, France. On July 1, the Ocean Viking rescued a total of 44 people from two wooden boats both in the Maltese Search and Rescue Region. Over the next two days, they saw three empty wood boats adrift and at least one of them had been set afire the organization believes after interceptions by the Libyan Coast Guard. On July 3, they rescued a further 21 people and spotted several additional empty boats.

On July 4 and 5, in the largest rescue performed by the Ocean Viking they took aboard an additional 369 men, women, and children that had been crammed on a large wooden boat which the crew believed was at risk of capsizing. The charity reported that it had been several years since they encountered such a large, unseaworthy wooden boat that had been launched from Libya. It took the crew over five and a half hours to safely transfer everyone off the wooden boat to the tug. Two other rescues in the same period included 67 people from one boat and 71 from the other. 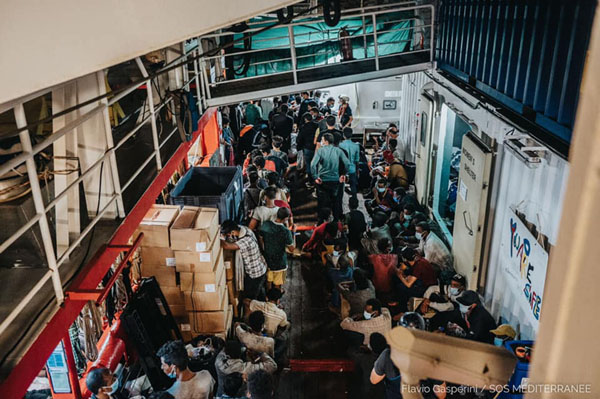 In just over 72 hours, the Ocean Viking reported that it has rescued 572 people, including 183 children, from six boats in the central Mediterranean. According to the organization, these individuals are attempting to escape the unimaginable violence they are experiencing in Libya. It is estimated that over 700 people have died or gone missing this year attempted to cross the Mediterranean, according to the International Organization for Migration.

SOS Mediterranee is calling for the EU to intervene so that it can offload the people aboard its vessel. They also said that a European search and rescue program needs to be urgently re-established in the Mediterranean to address the problem of the migrants attempting to flee the violence in Libya and elsewhere in Africa.