The result of the project is an LNG-fuelled Newcastlemax design which is in the process of receiving Approval in Principle from DNV GL.

The idea of developing LNG-fuelling infrastructure for the vessels operating on the Australia–China iron ore and coal trade route has been contemplated by major charterers, shipowners and operators for many years. As LNG production has climbed, especially in Australia, and in recognition of the upcoming IMO restrictions on sulfur emissions, the option of LNG as a single-system solution for emissions compliance has become ever more attractive.

Chinese ship designer SDARI developed the design of the 210,000 dwt Newcastlemax bulk carrier based on their highly energy efficient Green Dolphin design. Dual fuel engines were quickly decided upon by the project partners, as this is a mature technology with multiple suppliers offering solutions and the dual fuel design providing operational redundancy. 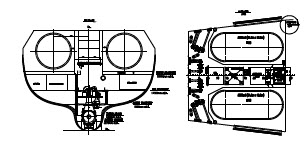 Based on fuel consumption analyses, an LNG fuel tank size of approximately 6,000 cubic meters was found to be optimal, with bunkering in Australia for the round-trip. Several locations for the LNG fuel tank were considered, and finally the optimal solution was found – with the two LNG fuel tanks placed directly above the engine room and submerged a few meters below the main deck. This innovative design offers protection for the fuel tanks, enhances fire protection and does not reduce the cargo carrying capacity, even for volumetric cargoes such as coal.

“An important part of the JIP was conducting the financial feasibility study for the design,” said Mike Utsler, Woodside Chief Operations Officer. “We looked at a wide range of capital and operational costs, including LNG and low sulfur fuel oil price sensitivities, as well as conducting a high-level bunker supply chain assessment. Based on this we found that, under the most realistic scenario, the payback period for the design was under 10 years, and under the optimistic projection just 6.7 years.”

The design, presented at Nor-Shipping 2017, is ready to serve as the outline specification for newbuilding orders in 2017.

It's calf season in Ireland. It's actually calf season in Ireland all year round, but the bulk of the two-week-old, unweaned calves sent to Europe's veal industry are shipped between February and April. The calves are separated from their mothers at birth. They are all male, taken from the dairy industry and loaded on to trucks which then board ferries for Europe.  A typical ferry journey from Rosslare in Ireland to Cherbourg in France on a ro-ro ferry takes around...