A new $60 million vehicle processing center with a ro-ro terminal has opened in the port of Mobile, Alabama. The new facility, which will be operated by a partnership between an Argentine and Chilean company, is part of an ongoing effort by the Alabama State Port Authority (ASPA) to expand and improve operations in the port.

The new 57-acre terminal is located on the ASPA’s main port multimodal complex. The facility, which is expected to have an annual throughput of 150,000 vehicles, offers storage for up to 7,000 vehicles. It has 1,500 feet of berth space which will initially be maintained with a 40-foot draft. According to the managers of the facility, this makes the terminal capable of handling all the pure car and truck carrying transport vessels currently in service.

During the dedication ceremony, the port also highlighted that the facility has access to five Class I railroads and a rail ferry service with connections throughout North America, as well as access to major U.S. interstate and highway systems. The operators said the appeal of the location on the Gulf Coast is its easy access both for long haul carriers using the Panama Canal and short sea transport to Mexico and Central America. 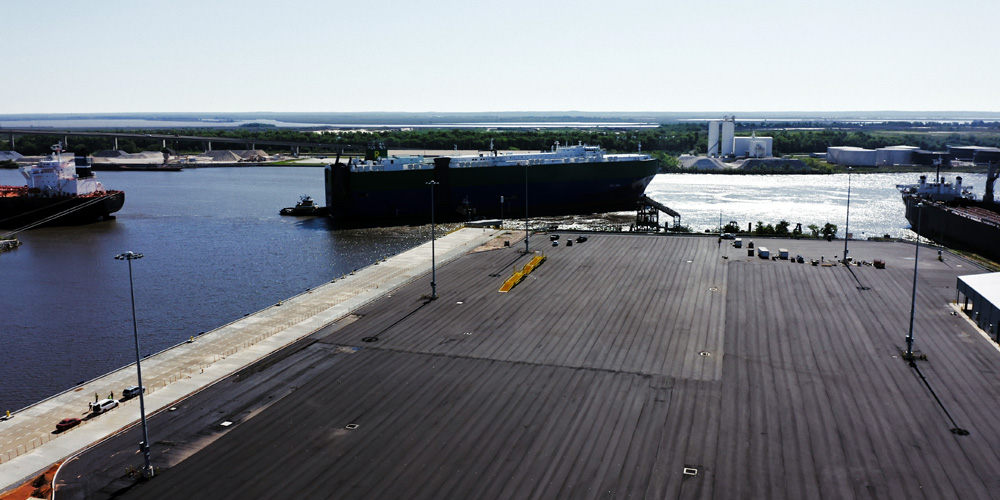 The opening of the new facility is part of a broader effort to expand operations in the Port of Mobile. In the spring of 2020, the Alabama Port Authority completed its 400-foot container dock extension at the APM Terminals Mobile facility, permitting it for the first time to simultaneously handled two container ships at the newly expanded berth. The berth extension now enables two 8,000-10,000 TEU vessels to be handled at the same time. The quay extension was part of a $50 million Phase 3 expansion that increased terminal capacity at the 10-year-old APM Terminals Mobile intermodal container complex at the Port of Mobile.

In May 2021, work began on the next major project, which is construction of a deeper and wider Mobile Ship Channel and improvements to the lower harbor turning basin. The U.S. Army Corps of Engineers executed two construction contracts for a multi-phase, $365.7 million construction program designed to deepen the existing Bar, Bay and River Channels Bar, by five feet to a project depth of 50 feet, with additional depths for wave allowances, advanced maintenance, and allowable over depth for dredging. The project also includes widening the Bay Channel by 100 feet for three nautical miles to accommodate two-way vessel traffic and other safety improvements.