Royal Vopak and AltaGas have entered into a joint venture to develop the Ridley Island Propane Export Terminal (RIPET) in Canada, the first such facility on the nation's west coast.

The project is to be designed to ship 1.2 million tons of propane per annum, with approximately 96,000 cubic meters of storage capacity.

The RIPET site is near Prince Rupert, British Columbia, on a section of land leased by Ridley Terminals from the Prince Rupert Port Authority. The site has the advantage of very short shipping distances to markets in Asia, notably a 10-day shipping time compared to 25-days from the U.S. Gulf Coast.

The brownfield site also benefits from railway access and ample deep water access to the Pacific Ocean which is ice-free year round.

Propane from British Columbia and Alberta will be transported to the facility using 50-60 rail cars a day through the existing CN rail network. The world class marine jetty enables the efficient loading of very large gas carriers that can access key global markets without limitation, says Vopak.

Vopak will take a 30 percent interest in RIPET with its investment underpinned by long-term customer contracts. Canada has a structural surplus of gas and natural gas liquids for which Asia is an important market.

About 80 percent of the current demand for propane in Japan, South Korea and China is satisfied by the Middle East. However, a burgeoning supply surplus in North America has increased the interest of Asian buyers in sourcing propane from North America. They are attracted to the lower prices, supply diversity and the lower political risk that accompanies North American propane.

Like natural gas, propane is a gas at room temperature and normal atmospheric pressure. The process to turn propane into a liquid for shipment is similar to converting natural gas into LNG, but is simpler and requires much less equipment and energy.

Propane has been produced and consumed in North America for decades, and has well-established, developed markets and infrastructure to support it. The U.S. has traditionally hosted both import and export facilities for propane, and became a net exporter of propane for the first time in 2012. Current export facilities are located at Ferndale, Washington (owned by an AltaGas affiliate); Mont Belvieu, Texas and Marcus Hook, Pennsylvania.

Most of Canada’s propane exports currently go to the U.S. by pipeline, truck or rail. Propane facilities in British Columbia consist mainly of rail and truck receipt terminals that serve as distribution centers to feed retail markets.

The largest source of propane in North America is the production of natural gas. Changes in natural gas drilling technology coupled with higher prices for propane have resulted in a large increase in propane supplies in western Canada. New drilling techniques have opened the development of natural gas trapped in what were previously inaccessible shale formations.

Higher returns on investment from natural gas with a high propane content led producers to focus their natural gas drilling on those formations that are also rich in propane and butane. Targeted drilling in British Columbia and Alberta is expected to substantially increase the supply of propane and result in a surplus for the region.

AltaGas believes a propane export facility is required in Canada to alleviate the increased supply of propane. This need will be heightened if LNG export facilities are developed in British Columbia.

Separate from RIPET, Vopak has additional land rights on Ridley Island, and the companies will explore the potential to expand their relationship there. 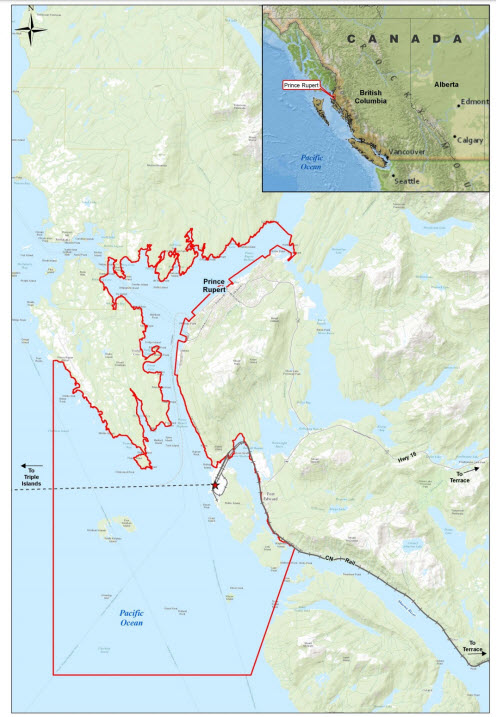