An average of 20 tons of pangolins and their parts have been trafficked internationally each year with smugglers using 27 new global trade routes annually, according to new research released by TRAFFIC and IUCN.

The report, The Global trafficking of pangolins: a comprehensive summary of seizures and trafficking routes from 2010–2015, was released in the wake of the world’s largest ever pangolin seizure, when China announced the seizure of 11.9 tons of scales from a ship in Shenzen last month.

Known as the world’s most trafficked mammal, all eight (four Asian and four African) species of pangolins are prohibited from international trade under CITES.

The new analysis of cross-border pangolin seizures has shown that at least 120 tons of whole pangolins, parts and scales were confiscated by law enforcement agencies from 2010 to 2015. It also shows that 159 unique international trade routes were used by traffickers during the six-year study period. By comparison, a previous analysis of CITES trade data found 218 such routes over a 38-year period from 1977–2014.

The study, by TRAFFIC and the University of Adelaide, reinforces the highly mobile nature of smuggling networks, with traffickers quickly shifting from commonly used routes after a short period and creating many new routes each year. The global nature of the trade is demonstrated, as 67 countries were implicated.

China and the U.S. were the two countries most commonly involved (i.e. having the highest number of incidents regardless of the quantity involved in each incident). China was the main destination of large-quantity shipments of scales and whole pangolins, while the U.S. was the main destination for large-quantity shipments of body parts. The quantities entering the U.S. were, however, not comparable to the massive shipments trafficked through Africa and Asia.

European countries served as transit points, with the exception of the Netherlands (and potentially Switzerland), which was primarily a destination for pangolins and their products. The Netherlands was also the only European destination country for large-quantity shipments of body parts and scales from Uganda and China respectively.

The report urges all implicated countries to review laws and increase vigilance. 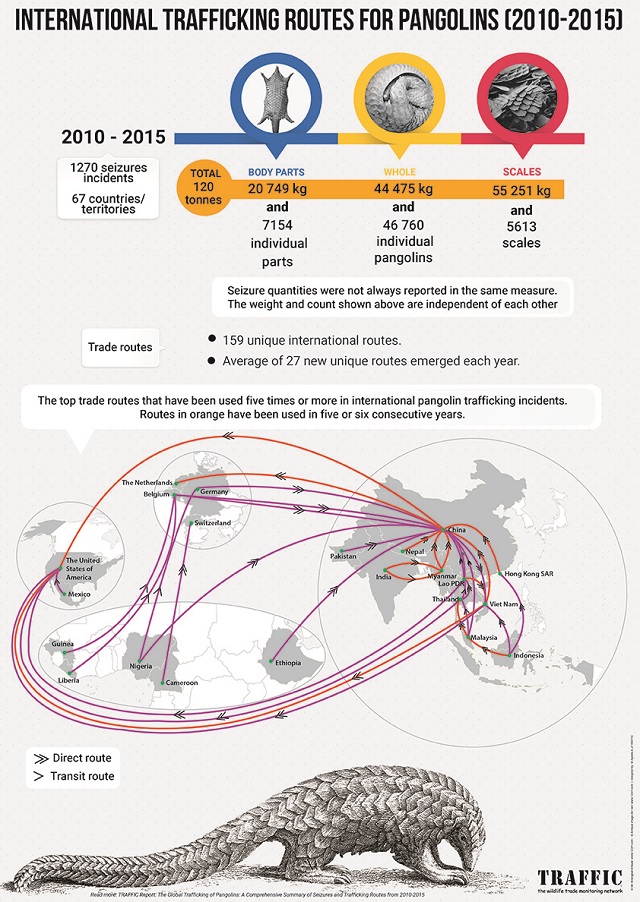