Salvage teams working around the clock on the wrecked bulker beached off Gibraltar passed a key milestone reporting that they have recovered nearly all of the oil aboard the vessel. The recovery efforts are continuing to focus on various parts of the ship while clean-up efforts also made progress in reducing the flow of oil onto Gibraltar’s beaches. As a result, the government is looking to step down starting on Tuesday, September 6 from the “major incident” to permit more activities in the port.

“With the exception of Tank 2, the salvors are confident that all concentrations of pumpable oil have been extracted, including those in the main engine room tanks. Some product remains in Tank 2, which the salvors plan to attempt to extract,” the Government said in its end-of-day update on Monday, September 5.

They, however, warned while less of a threat to the environment that there are still small tanks around the ship with small quantities that need to be emptied. There have also been some discrepancies between the amounts of fuel reported by the vessel’s crew and what was removed by the salvage teams. A final measure is still being taken on the amount of diesel and low sulfur fuel oil removed from the tanks plus efforts have also begun looking for the presence of any oil concentrations in void spaces and non-tank spaces.

Yet, while the teams are confident that most of the recoverable material has now been removed, government officials continue to warn that “continued discharge of pollutants is expected until the time that the salvage operations are complete.”

The containment and recovery efforts were complicated overnight by stronger winds. The teams reported that the second containment boom around the vessel had been displaced but with the aid of Salvamento Maritimo they were restoring the boom and adding weights to hold it in place. A boom near a beach also needed to be repositioned while five vessels also remain in the area with sorbent booms deployed. There are also two pairs of vessels towing a “J” formation boom to capture oil that leaks past the booms around the vessel. 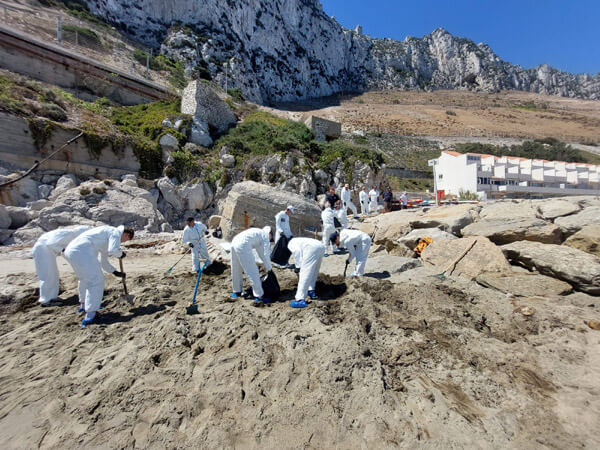 Overall, the situation at the OS 35 remains stable after concerns over the weekend when water began seeping into the engine room of the bulker. Salvage crews were forced to suspend the use of the vessel’s equipment which slowed the efforts but divers have reportedly been successful in slowing or stopping the water entry into the ship. The teams had warned that a “degree of deterioration in the structure around the engine room” could be expected due to the water.

In an effort to improve the buoyancy of the OS 35 and reduce pressure on the hull teams over the weekend also focused on pumping water from the number 5 cargo hold. The pumping from the hold was expected to improve the buoyancy of the aft section of the vessel which has remained afloat and possibly mitigate the impact of the leak on the structural integrity of the vessel.

The next phase of the efforts to remove contaminants aboard the vessel is also ongoing to remove other elements such as chemicals, food, loose items, and furniture that could also become pollutants in the case of bad weather at the site. They will also begin removing the cargo and the contents of the vessel.

Teams are rushing to complete as much of the clean-up this week with the forecast that the calm weather patterns that have prevailed are likely to shift by week’s end. So far, they have had favorable conditions with mostly light winds and calm seas aiding in the clean-up since OS 35 was beached on August 30.