Navy Relief Mission in Tinian and Saipan Comes to a Close

In the wake of Super Typhoon Yutu last October, the U.S. Navy deployed hundreds of personnel to the islands of Tinian and Saipan to provide relief. Yutu's eyewall passed directly over Tinian and brushed the southern coast of Saipan, leaving a trail of heavy damage to homes and infrastructure, and military servicemembers were among the first on the ground providing rescue and relief assistance.

In Tinian, Seabees from Naval Mobile Construction Battalion (NMCB) 1 and NMCB 3, alongside other units from the U.S. Indo-Pacific Command, repaired 184 roofs, installed 196 temporary tents for families whose homes were damaged and unlivable, produced more than 54,000 gallons of potable drinking water, cleared debris from 64 miles of road, and moved over 10,000 cubic yards of debris.

On Thursday, civilian and military dignitaries gathered in Tinian to offer praise and thanks to the Seabees for their efforts supporting the island.

“To our men and women in uniform today, I salute you,” said Tinian Mayor Edwin Aldan at an event Feb. 7. “In rebuilding our homes, you have helped restore certainty in our community and the confidence that we need to keep moving forward.”

The Seabees deployed to Tinian immediately following Super Typhoon Yutu to support the Defense Support of Civil Authorities (DSCA) and Federal Emergency Management Agency (FEMA) mission following Yutu, which was the second-strongest storm to hit U.S. territory in recorded history. They were part of Task Force-West, which included units from the Navy, Marines, Air Force, Army, and Coast Guard. 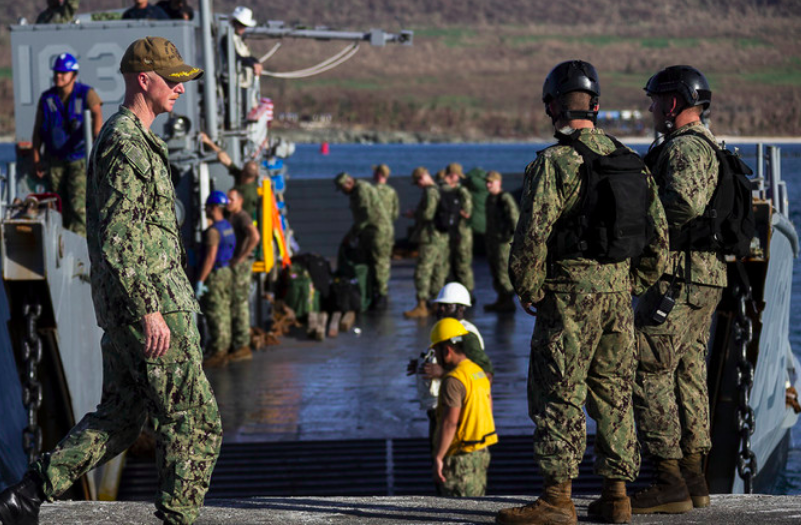 Sailors and marines arrive in Tinain for the relief effort, November 2018 (USN)

“As the storm passed over the island, we had prepared and we know that you had prepared as you always do for these storms,” said Rear Adm. Shoshana Chatfield, commander Joint Region Marianas. “The devastation here had struck me so profoundly, and the survivors of this storm have been on my mind every day since then. It has been a great honor of mine to lead the Department of Defense mission here.”

With the close of Department of Defense support to DSCA, FEMA and civilian authorities will continue to provide support to essential services on Tinian and Saipan. Power and water restoration is well under way, and FEMA is funding a permanent housing repair program for homes damaged in the storm. The agency is also underwriting the installation of temporary buildings at damaged school campuses so that the classes can resume.

“Without our Department of Defense and the many components of it and FEMA, these islands would have not been able to recover in the short period of time that we have,” said CNMI Lt. Governor Arnold Palacios. "Are we back to normalcy? No. But we are almost there and it is because of your hard work every day, day in and day out. Know this that you have a grateful American community in Tinian and Saipan and the rest of the Commonwealth."