Nations are beginning to offer COVID-19 vaccinations to seafarers. However, the calls are continuing for nations to increase their efforts and expanding them to cover more seafarers as they travel around the world.

Working with local health organizations, the cruise lines with ships in the United States have begun to implement vaccination programs. The efforts started at Port Canaveral in Florida and have spread to both PortMiami and Galveston, Texas. It is an important element of the cruise lines’ restart plans.

Genting’s Dream Cruises also reported that it was able to make arrangements working with Taiwan’s Ministry of Health and Welfare. Beginning on May 7, crew members and shore staff started receiving their first dosage of the COVID-19 vaccine at the Keelung Hospital. Genting expects that the first dose of the vaccine will be completed in three batches. 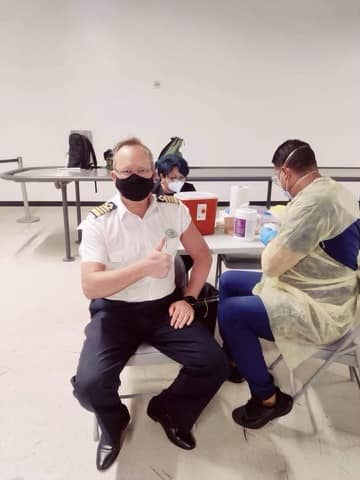 Australia’s NWS Health department has also announced that it is beginning to provide COVID-19 vaccinations for seafarers. The program, however, is currently being limited to a small number of foreign seafarers focusing on only gas carriers operating from the Port Botany Bulk Liquids Berth. According to the Maritime Union of Australia, the program is designed to reduce the risk of the COVID-19 virus entering the community.

Sixteen seafarers onboard Singapore-flagged LPG carrier Epic St Agnes, which is on long-term charter to Australian energy giant Origin Energy, received their first vaccinations on May 13 while the vessel was berthed at Port Botany. The Epic St Agnes operates exclusively on the Australian coast, loading and discharging bulk gas at ports in Queensland, New South Wales, Victoria, Tasmania, and the Northern Territory.

Maritime union leaders pointed out that the initiative follows last month’s COVID outbreak on another LPG carrier, the Inge Kosan, also operating from Australia. In that tragic case, the body of a seafarer washed up on a beach in Vanuatu and tested positive for the virus. Testing of crew members on that vessel found 12 of 13 had the virus. Australia has also reported numerous cases of infected seafarers arriving from overseas on vessels, requiring quarantine and in some cases hospital treatment for the virus.

Maritime Union of Australia Sydney Deputy Branch Secretary Paul Garrett welcomed the NSW Health initiative but pointed to the Inge Kosan case questioned why the vaccinations were only taking place on a small number of vessels at the bulk liquids berth. “This Australian-first effort to vaccinate foreign seafarers that make regular visits to Australian ports is a welcome step to reduce the risk of COVID transmission to waterfront workers, but it needs to be replicated at all ports and terminals,” Garrett said.

“Thousands of foreign ships visit Australia each year, with many conducting regular trips or undertaking coastal trade between Australian ports, resulting in a significant risk of COVID transmission into the community through direct contact with waterfront workers,” said MUA National Secretary Paddy Crumlin.

The International Transport Workers’ Federation in Australia is joining with the MUA calling on the government to expand the initial effort to seafarers at all of Australia’s ports.

While some seafarers working aboard Danish managed ships have been able to receive their vaccinations through international efforts, including in the United States, Danish Shipping along with the unions Metal Maritime and Maskinmestrenes Forening, are calling on the Danish Minister of Health to expand the country’s vaccination programs and give special consideration to seafarers.

"The seafarers deserve the recognition of both Denmark and the world community, for their great efforts and deprivation during the Covid-19 pandemic, not only in speech but in action," says Lars Have Hansen, Chairman of the Association of Mechanical Engineers.

The Danish organizations are calling on the government to donate unused dosages of the Johnson & Johnson vaccine as a humanitarian effort for Indian seafarers hard hit by the resurgence of the virus in India. They also cited efforts to Belgium and the Netherlands that vaccinated their seafarers and then began to vaccinate foreign seafarers. Danish Shipping is asking the government to provide the opportunity to vaccinate seafarers at Copenhagen Airport as part of crew change operations.

This week the Netherlands also announced that beginning in June it would begin a vaccination program for all seafarers regardless of nationality working on Dutch-registered or managed ships. They plan to administer the vaccination in the major seaports.