Mediterranean Shipping Company (MSC) started the new year recognized as the world’s largest containership company by capacity. Data analysts and consultancy Alphaliner updated its ranking of the Top 100 and for the first time reflects MSC in the lead position ahead of Maersk by just 1,888 TEU, a small fraction of its nearly 4.3 million TEU total capacity.

A relative upstart in the industry when compared to the venerated Maersk that dominated the rankings for decades, MSC is expected to continue to accelerate its growth. Privately held, MSC does not announce each transaction leaving industry analysts to link the company to construction orders, charters, and secondhand tonnage. Alphaliner projects that MSC will increase its current capacity by nearly a quarter adding nearly one million TEU to its capacity.

Founded in 1970, and controlled for more than 40 years by the Aponte family, MSC evolved from one vessel to its current fleet of 645 ships with a rated capacity of 4,284,728 TEU. The company reports that it today calls at 500 ports on more than 230 trade routes and annually transports more than 23 million TEU. One of the elements that have helped MSC to accelerate its growth in recent years is the use of chartered vessels with a smaller owned fleet. Currently, MSC is reported to own just 260 of its ships with a capacity of 1.5 million TEU with nearly two-thirds of its capacity coming from vessels mostly on long-term charters.

“It does not mean anything,” Soren Skou CEO of Maersk told Bloomberg during an interview in late December 2021. Skou who took the reins of the shipping company in 2016 has repeatedly said that he was not focused on size but instead a business strategy to evolve Maersk into a land and sea logistics company for its customers.  Maersk was on track to report record results and the largest profit ever for a Danish company in 2021. 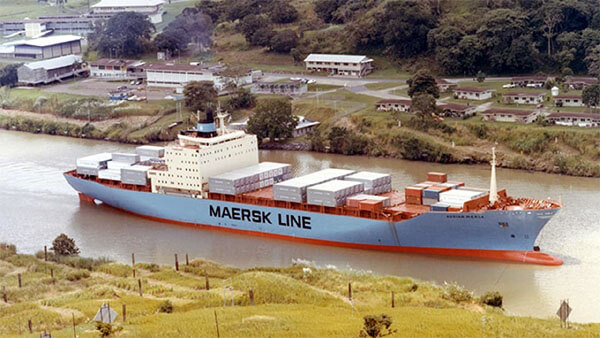 Maersk traces its origins to 1904 and got its start in container shipping in 1975 with the first of nine newly built ships. The Adrian Maersk departed Newark, New Jersey on September 5, 1975, carrying just 385 containers. Under Skou’s leadership, Maersk is accelerating its investment in the logistics business. He oversaw the sale of the tanker and oil businesses while this year Maersk announced investments in new green technologies and expanded its terminal operations. In December, Maersk announced its largest-ever acquisition, the plan to acquire LF Logistics, a Hong Kong-based contract logistics company valued at $3.6 billion.

The Danish shipping giant currently has a fleet of 738 vessels with a capacity that also nears 4.3 million TEU.  Maersk owns 60 percent of its fleet of 330 vessels. Unlike its competitors thought, Maersk has yet to announce plans for a large expansion of its containership fleet. In addition to MSC, other major carriers ranging from CMA CGM to Hapag, COSCO, ONE, Evergreen, and HMM, have each announced plans for at least 20 percent expansion of their capacity. Maersk made news in August 2021 with the order of eight 16,000 TEU vessels that are designed to operate on methanol, but its total order book represents just six percent of current capacity. Unlike all of its competitors, Maersk has also not ordered any of the ultra-large vessels set to surpass the 24,000 TEU mark.