France’s Michelin Group, best known for its long history of innovations in tires, announced that it is moving forward with its designs for an inflatable wing sail system that the company hopes will bring the same level of innovation to commercial shipping and pleasure boats reducing fuel consumption and emissions. Announced in mid-2021, the WISAMO system has undergone its first tests and the company has an agreement to install a smaller scale prototype on an operation commercial ship in mid-2022.

The WISAMO (Wing Sail and Mobility) concept was developed jointly by Michelin’s research and development department in collaboration with two Swiss investors and involves famed French long-distance sailor, Michel Desjoyeaux, the only person to twice win the Vendée Globe race.

WISAMO is an automated, inflatable, and retractable, wing sail that the companies report can reduce fuel consumption by up to 20 percent. Michelin says it is particularly suited to ro-ro vessels, bulk carriers, gas carriers, and tankers and can either be included in original designs or retrofitted.

Michelin has agreed with Compagnie Maritime Nantaise to install a prototype version of the sail on the Ro-Ro container carrier the MN Pelican in 2022. The prototype will have a surface area of 100 sq. meters providing the opportunity to test the technology in actual commercial maritime navigation conditions. Built in 1999, the Pelican is a 507-foot long vessel operating under charter to Brittany Ferries. The 8,600 dwt vessel makes twice weekly trips between Poole, Great Britain and Bilbao, Spain.

The tests aboard the in-service vessel come after the group completed a number of tests and measurements between June and December 2021 on Lake Neuchatel in Switzerland. Working with Desjoyeaux’s sailboat, starting at the end of February 2022, they plan to begin the second phase of testing with the 100 sq. meter prototype. These more extensive tests will include winter maritime conditions in the notoriously difficult Bay of Biscay, known for its strong storms and heavy sea conditions.

The first technical tests demonstrated, Michelin reports, that the wing sail system offers a wide range of use, including “close-hauled” (headwind), providing what they believe is one of the widest operating ranges for modern sail technology. They project that it can be used on all maritime routes and because it is retractable, it provides easy access for navigation in ports and under obstacles such as bridges. 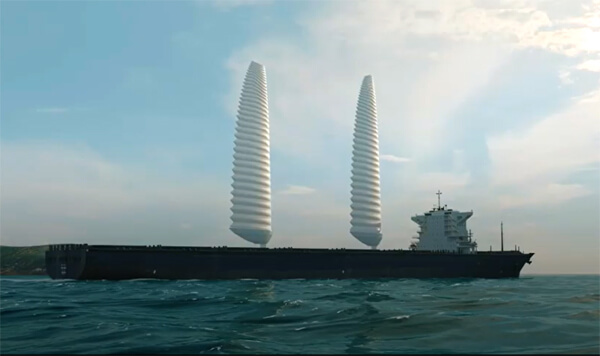 Concepts for the wing sail (Michelin)