MH370: Nothing Amiss with Crew or Plane

The Malaysian government has released the Safety Investigation Report into missing Malaysia Airlines flight MH370. The report states that investigators have been unable to determine the real cause for the disappearance of the aircraft but notes the aircraft was under manual control when it deviated from its flight plan.

Flight MH370 disappeared in March 2014 with 239 passengers and crew on board en route to Beijing from Kuala Lumpur. The investigation showed that flight MH370 diverted from the filed flight plan, heading back across Peninsular Malaysia towards the Southern Indian Ocean. It could not be established whether the aircraft was flown by anyone other than the pilots, but flight simulator trials established that the turn back was likely made while the aircraft was under manual control.

According to the report, there were no behavioral signs of social isolation, change in habits or interest, self-neglect, drug or alcohol abuse among the crew. Examining the potential loss of cabin pressure, and resulting reduced oxygen available, the report concluded that there was no evidence that physiological factors or incapacitation affected the performance of the members of the flight crew.

The report notes, without discussion, that two passengers were found to be traveling on stolen passports. In 2014, Interpol concluded that the two men, Pouria Nour Mohammad, 19, and Seyed Mohammed Rezar Delawar, 29, had no terror links. They were friends and were hoping to seek asylum in Europe, according to Malaysian officials. 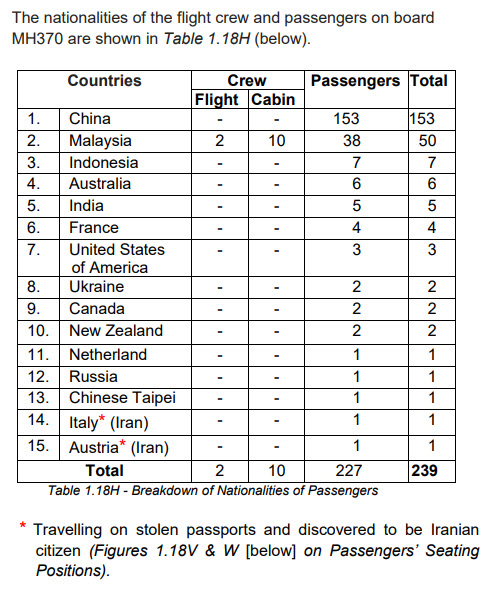 The report was made public on Monday and is available on the Malaysian Ministry of Transport website.

Details of the Turn

The turn was made from a heading of about 060° to a final heading of about 240° (a change of 180°) based on recorded radar data. Simulator sessions indicated that a bank angle of at least 30° is required to accomplish a half rate turn, of 180° in two minutes with a Ground speed of about 470 knots. Such a turn is not possible using autopilot. It is unclear how the aircraft was flown for the remainder of the flight, however the aircraft made several other turns and rolled out to level flight after the turn. The satellite communications data indicated that the aircraft was airborne for more than seven hours suggesting that the autopilot was probably functioning, at least in the basic modes.

“From the foregoing discussion it can be generally deduced that there is no evidence to suggest that a malfunction had caused the aircraft to divert from its filed flight plan route. The aircraft’s maintenance history and events prior to the last flight do not show any issues that could have contributed and resulted in the deviation and subsequent changes in the flight path.

“Although it cannot be conclusively ruled out that an aircraft or system malfunction was a cause, based on the limited evidence available, it is more likely that the loss of communication (VHF and HF communications, ACARS, SATCOM and Transponder) prior to the diversion is due to the systems being manually turned off or power interrupted to them or additionally in the case of VHF and HF, not used, whether with intent or otherwise.

“Similarly, the recorded changes in the aircraft flight path following waypoint IGARI, heading back across peninsular Malaysia, turning south of Penang to the north-west and a subsequent turn towards the Southern Indian Ocean are difficult to attribute to any specific aircraft system failures. It is more likely that such maneuvers are due to the systems being manipulated.

“The analysis of the relevant aircraft systems taking into account the route followed by the aircraft and the height at which it flew, constrained by its performance and range capability, does not suggest a mechanical problem with the aircraft.”