The Maersk product tanker Maersk Etienne continues to find itself caught in a precarious political situation more than two weeks after going to the aid of a boat filled with migrants in danger of sinking between Malta and Tunisia. Human rights groups have joined in calling on the governments to resolve the situation.

"The merchant fleet is neither designed nor equipped to care for additional people, and we are quickly depleting the supplies on board," Tommy Thomassen, chief technical officer at Maersk Tankers, told Reuters in an email.

Yet, the vessel continues to find itself waiting at anchor off Malta with no permission to proceed into port to disembark the 27 migrants that it rescued or permission to return to Tunisia with the people it rescued.

The situation reportedly began on August 3 when a human rights group received reports of a migrant boat in danger of sinking. Raising the alarm, the group convinced the Maltese rescue coordinator to call for action and the Maersk Etienne responded to the call for assistance from a small boat approximately 70 nautical miles north of Abu Kammash, Libya. The migrants, including women and children, were brought aboard the tanker and given blankets and food while the vessel assumed it would proceed to Malta to disembark the rescuees.

Questions emerged after the rescue if the boat was in fact in Maltese waters. Seeking to discourage the flow of migrants to its shores Malta has delayed and the shipping line is left to appeal for action. Reuters is quoting Thomassen saying, "We call on authorities and governments for humanitarian assistance and to urgently find a solution to safely disembark the rescued people." 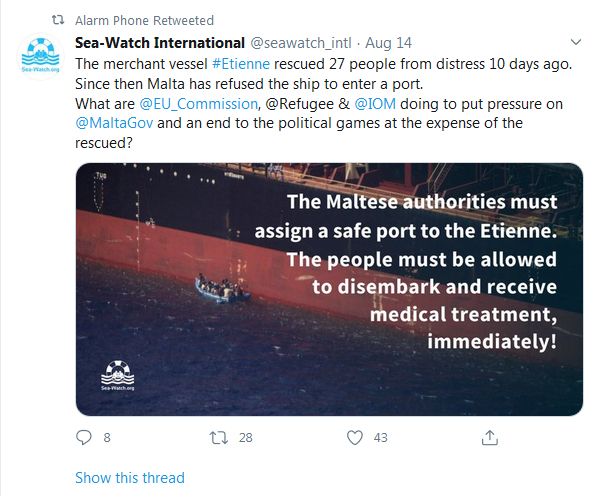 Nearly a week ago another human rights group, Sea-Watch International also joined in calling on the Maltese authorizes to assign a safe port.

For the moment, all Maersk Tankers can do is sit and wait and continue to appeal for a resolution responding to its act of kindness on the seas.