Maersk announced its first newbuild investment for the offshore wind sector as part of an agreement with Kirby Offshore Wind that will see the two companies partnering to service the emerging sector and carry out the installation of Equinor and BP’s planned Empire Wind in New York. Maersk will build a newly designed wind turbine installation vessel while Kirby will build two U.S.-registered feeder barges and diesel-electric hybrid tugboats to transfer materials from the staging point in Brooklyn to the installation vessel at the site 15 to 30 miles southeast of Long Island, New York.

“We are very pleased with having signed this agreement with Maersk, providing a state-of-the-art vessel for the project in New York demonstrating industry collaboration with the U.S. supply chain in providing new technology and solutions for the U.S. offshore wind market,” said Trond Gulichsen, project director for Empire Wind. “The Maersk concept will ensure efficient installation of the Empire Wind turbines by using a dock-in feeder solution, which will improve safety by reducing the number of offshore lifts.”

Maersk reports it has been developing the design for the new vessel since 2019 saying that the investment in the construction is designed to position Maersk Supply Service as a major contractor in offshore wind. The vessel, which will be built in Singapore by Sembcorp Marine, was designed by Maersk and Sembcorp. The first of its kind approach they report will be 30 percent more efficient than a conventional jack-up vessel. The jacking units, load transfer system, and crane will be provided by NOV, and the design work has been supported by class society ABS. 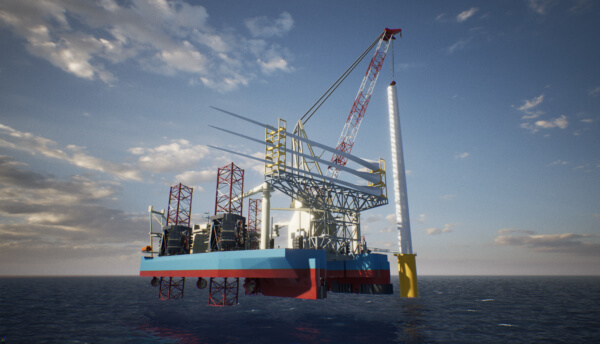 The installation concept combines a new wind installation vessel design with a patented load transfer system. The vessel remains on location to carry out installations, while to improve operating efficiency and met the U.S. Jones Act requirements, Kirby’s two U.S.-built tugs and barges will transport wind turbine components out to the installation site from the staging facility Equinor and BP are developing at the South Brooklyn Marine Terminal. Kirby reports it plans to invest between $80 and $100 million for the construction of the barges and tugs.

“The new feeder solution equips Maersk Supply Service with a methodology that ensures a more efficient installation, which will, in turn, enable developers to release their supply chains more quickly and lead to faster revenue generation from their wind farms,” said Jonas Munch Agerskov, Chief Commercial Officer at Maersk Supply Service. “All of this will contribute to bringing down the levelized costs of offshore wind. The solution is also less weather dependent, allowing installation all year round.”

According to Sembcorp Marine, the vessel has also been designed to handle the next generation of wind turbines, which are scaled up in size with longer, lighter rotor blades, and taller towers. The vessel will also be the first WTIV built by Sembcorp Marine with the steel-cutting ceremony set for Q4 2022 and delivery into U.S. waters is expected in 2025. Once completed, the vessel will operate under charter to Empire Offshore Wind, which is a joint venture between Equinor and BP.

Kirby also highlighted that the contract with Maersk Supply Service represents a 20-year framework agreement where the Empire Wind project is the first combined effort between the companies. Kirby and Maersk expect wind turbine installations and the associated feeder barge services to commence beginning in late 2025 or early 2026.

“We have been carefully evaluating opportunities to enter the offshore wind industry for several years, and we are very pleased to partner with world-class operators such as Maersk, Equinor, and BP on a critical foundational project with a multi-year transportation agreement,” said David Grzebinski, Kirby’s President and Chief Executive Officer. “Our commitment to build two next-generation feeder barges and emissions friendly diesel-electric hybrid tugboats, which could have the ability to substitute diesel for alternative fuels, is not only important for Kirby’s ESG journey, but also for the U.S. maritime sector. These vessels will create new American jobs, both during the construction phase at two U.S. shipyards, as well as for U.S. mariners once operations commence.”

The original proposal for the Empire Wind site was submitted at the end of 2015 and approved in the spring of 2017. Since then, it has been working through the regulatory process toward construction approval. The first phase of the Empire Wind Project is due to be constructed approximately 14 miles south of Long Island and will consist of 68 GE Haliade-X wind turbines, each rated at 12 MW, along with an offshore collector station, two submarine transmission lines to an onshore substation, and two cable circuits connecting the project’s onshore substation.

The development partners, Equinor and BP, however in October 2021 submitted a request to the Federal Energy Regulatory Commission to delay the commissioning of New York’s first large, offshore wind farm by 18 months. They said the timeline for the project was not achievable due to the regulatory process reporting that they now anticipated that Empire Wind will achieve commercial operations by December 2026.