Authorities are responding to a collision on the Houston Ship Channel between a 755-foot LPG tanker and a tug pushing two barges near Bayport, Texas. 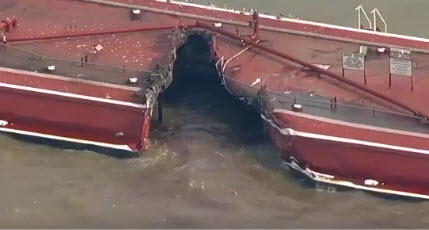 The tanker Genesis River and the tug Voyager collided near Light 71-74 on Friday. The tug was transporting two barges loaded with the gasoline blend stock Reformate. One barge capsized and one is reported damaged.

There are no reported injuries, but Reformate is considered a carcinogen, toxic to humans and the environment.

The Center for Toxicology and Environmental Health is also involved in monitoring the impact of the spill on nearby communities where some residents have reported an unusual smell.

The Genesis River was delivered to Japan's K-Line late last year. The 54,149dwt vessel has a cargo capacity of 82,400 cubic meters.