The summer season has begun along the Northern Sea Route with a first transit by an LNG tanker carrying Yamal LNG to Asia without the need for icebreaker escort.

The Arc7 Vladimir Rusanov left the Sabetta port on June 29, one of 126 tanker shipments made this year from the project which has produced 9.0 million tons of LNG and 0.6 million tons of stable gas condensate so far this year. All three LNG trains were running above nameplate capacity in the first half of 2019. 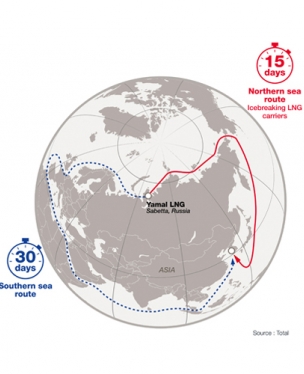 Most of the LNG was transshipped from ice-class LNG carriers to conventional vessels in Norway. From the start of transshipment in November 2018, 123 ship-to-ship transfer operations have been conducted. That will change now, and the seaport in Norway that has handled several million tons of Yamal LNG is now quiet. The last LNG tanker left Honningsvåg on June 29.

At most, six LNG carriers were simultaneously involved in transshipment outside Honningsvåg, reports the Independent Barents Observer. The business was handled by Norwegian company Tschudi Shipping, but the company's agreement with Novatek has now ended. It was initiated in November 2018 when Yamal LNG's second train came online and Novatek needed more export capacity but lacked sufficient ice-breaking tankers.

Transshipment activities are now being moved to Russian waters, and operations are expected to start up near Kildin Island, Kola Bay, later this year. Novatek intends to build a permanent terminal near Murmansk with capacity to handle 20 million tons per year.

Ultimately, Yamal LNG's 17.4 mtpa natural gas liquefaction plant will consist of three LNG trains of 5.5 mtpa each and one LNG train of 900 thousand tons per annum, using the hydrocarbon resources of the South-Tambeyskoye field in the Russian Arctic. The first LNG Train began production in Q4 2017 and Trains 2 and 3 - in July 2018 and November 2018, respectively.

Novatek is expected to make final investment decision in the Arctic LNG 2 project, near Yamal LNG, soon, after selling stakes to Total and several Chinese and Japanese companies.

The National Retail Federation is forecasting a dramatic, sustained reduction in container import volumes in the United States due to the COVID-19 pandemic. The NRF predicts that import TEU volume will be down by about 20 percent every month through July, and will still be down by about 13 percent in August (year-on-year).  “Even as factories in China have begun to get back to work, we are seeing far fewer imports coming into the United States than previously expected,” NRF...

One employee at the Port of Virginia has tested positive for the novel coronavirus, port officials confirmed in a webcast on Thursday. The individual was last at his post at Virginia International Gateway on March 21, and areas where he had visited have been carefully sanitized by a specialist contractor. One colleague had come into contact with him, and that individual has been identified.  The case has not had any operational impact on the port. In a new precautionary measure,...