China’s Guangzhou Shipyard International (GSI) has launched one of the world’s largest cruise ferries, which will be the largest operating in the Mediterranean and one of the most energy-efficient yet built. The ferry, which is named Moby Fantasy, is the first of two large ferries that are being built to replace four older vessels operated between Italy and the island of Sardinia by Onorato Armatori’s Moby Lines.

The launch took place in Guangzhou, China on November 6. Photos provided the first look at the unique profile and hull spaces created to improve the efficiency of the vessels in operation. The design, developed by OSK ShipTech, sought both to realize maximize the economy of scale while also reducing the environmental footprint for the ships.

Ordered in 2019, each of the ferries will be approximately 69,500 gross tons making them the size of a mid-sized cruise ship. The only larger ferries currently in operation are running in the Baltic for Color Line. Moby’s new ferries will each measure 777 feet in length and have a beam of 105 feet. Each ship will accommodate up to 2,500 passengers in 550 cabins. They will also have a capacity for up to 1,300 cars or 300 trucks. 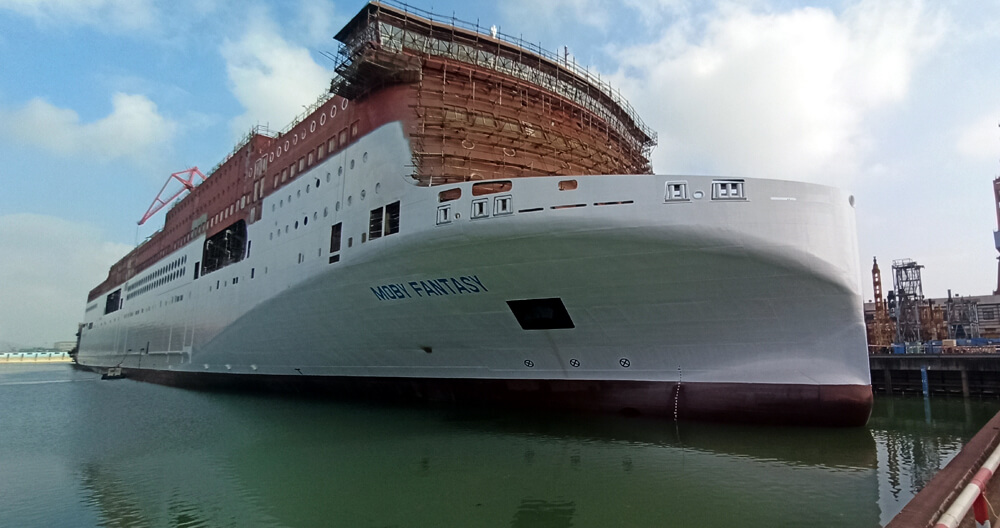 Moby is promoting the ferries as the greenest yet built. Despite their size, they will use up to 30 percent less energy than the company’s current large vessels. Each vessel will be outfitted with Wartsila diesel engines and hybrid exhaust gas scrubbers. According to Moby, they are also being outfitted with the possibility of switching from traditional fuel to LNG, should that be required at a later date. They will have a cruising speed of 23.5 knots, with a peak speed of 25 knots.

In addition to their size, the ferries are being furnished with a similar level of appointment and amenities to modern cruise ships. “It represents a revolutionary concept for ferry ships as we know it today,” writes Moby. “The furnishings, onboard equipment, and cabins are more similar to those on cruise ships than to ferries. Every detail has been designed to ensure maximum quality, in the cabins and the public areas.” Portions of the passenger areas are also designed to be closed during the tourist off-season on the route.

The first steel for the sister ships was cut in June 2020 and it was originally anticipated that the Moby Fantasy would be delivered in 2022. The company has announced due to delays related to the pandemic that the vessel will now enter service in 2023 and be followed by her sister ship the Moby Legacy. 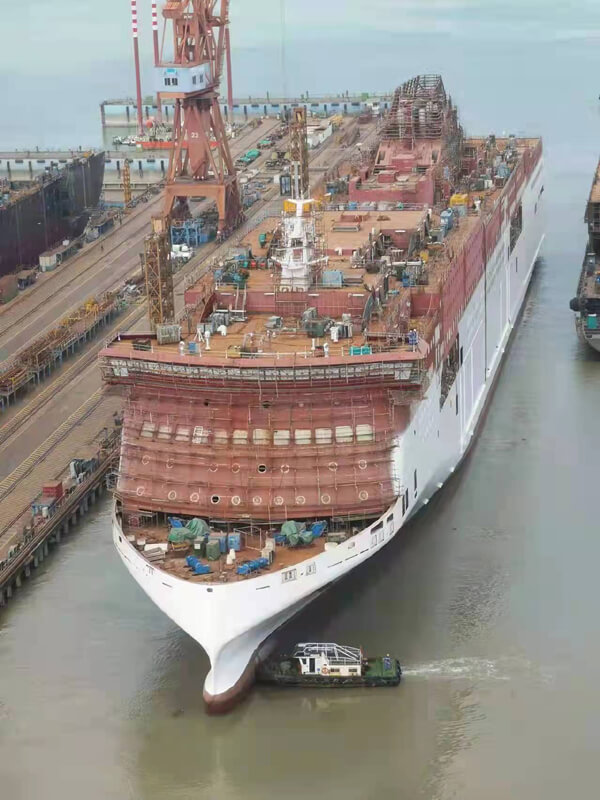