China put into service a new river cruise vessel that is being promoted as the world’s largest pure electric cruise ship. Known as the Three Gorges 1, the fully electric vessel that operates on battery power departed on its maiden voyage after final outfitting and testing. Trials and maneuvering testing had been underway for the past month.

The Three Gorges 1, which is 328 feet long with a 53-foot beam, has accommodations for 1,300 passengers including cabins and a range of lounges and food halls. According to Chinese officials, it was built at a cost of $23.5 million as part of a demonstration project for electric power first proposed in 2018. The Chinese Ministry of Industry and Information Technology and the Ministry of Transportation jointly funded the project which is part of a broader effort aimed at electrification of the Yangtze River region.

The vessel is powered entirely by electricity with a battery capacity of 7,500 kilowatt-hours, which according to the company is equivalent to the total battery capacity of more than 100 electric vehicles. They report that the vessel has the capacity to operate more than 60 miles on one charge and can be fully recharged in just six hours. The batteries developed by CATL will reduce fuel consumption by 530 tons and gas emissions by 1,660 tons per year. 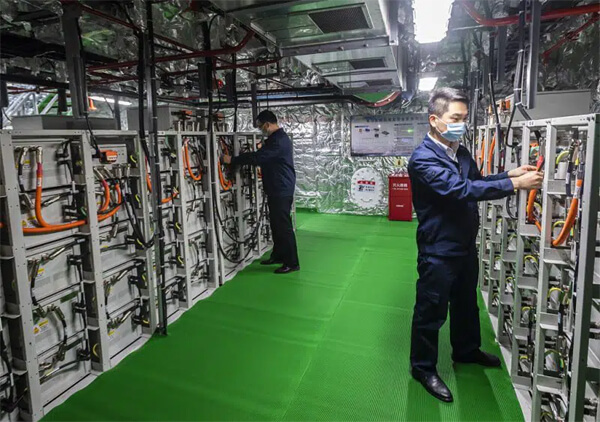 The vessel has batteries providing 7,500 kWh

Vessel operations are monitored by an automatic control system and intelligent management system. According to the project developers, the systems will help to reduce equipment failure rates and maintenance costs while also optimizing the operations of the vessel. Systems aboard the vessel are also optimized for battery operations, with for example what the Chinese are calling a DC inverter central air-conditioning system. They also highlighted that without the diesel engines the vessel operates with low noise and vibration providing a more comfortable environment for the passengers.

Support the operation of the ship and the broader Yangtze electrification project, they have also developed the “world’s first high voltage + low voltage charging system.”  According to the developers it solves key challenges in the operation of electric vessels while also providing a fast-recharging capability. Power for the entire system will come from the hydroelectric station at the Three Gorges dam.

China is working toward a goal of fully electrifying the Yangtze and expanding the system to other inland routes including the Pearl River, Bohai Bay, and northern China. Chinese officials said they are exploring the development of an integrated network of electric charging points along the river system as they look to develop a grid connecting the Yangtze and nearby rivers to the sea.

As the next step in the electrification projects, Cosco Shipping announced this month that they will build and operate two electric containerships on the Yangtze River. Due for delivery in late 2023, the two vessels will be 393 feet long each with a capacity of 700 TEU. They will operate along the Yangtze for a distance of more than 600 miles. They will use containerized batteries the size of a 20-foot container with a capacity of 50,000 kWh. These batteries will be charged onshore with Cosco envisioning a network of charging stations and depots to exchange the batteries along the river.