A consortium of Korean companies and researchers is reporting that they have made significant progress in the development of the technology that will be required to transport liquified hydrogen in large volumes aboard ship. Viewed as a critical component to the efforts to decarbonize the operations of the maritime industry, the progress in research hydrogen is leading to predictions that the industry might have the technology for the first hydrogen shipping in as little as four years.

The effort included the participation of the Korea Research Institute of Ships & Ocean Engineering (KRISO), Hylium Industries, POSCO, and Korea Shipbuilding and Offshore Engineering who have partnered to work on technologies for hydrogen. They worked with the Korean Register of Shipping to review the technology.

KRISO announced that the group has obtained two AIP certifications from the Korean Register of Shipping for the design of liquid hydrogen fuel tanks for ships. The tanks address the critical challenges for liquid hydrogen including the need to hold the liquid at a temperature that approaches absolute zero as well as the impact that the extreme temperature has on materials. On the challenges is a phenomenon known as “hydrogen embrittlement,” in which hydrogen penetrates the metal and changes the metal to a fragile form such as glass. The AIP (Approval In Principle) verified the validity of the stability and performance of the development target for the concept and basic design, and the process of obtaining official certification for the relevant liquefied hydrogen fuel tank and related technologies.

The design review was for two processes for creating tanks capable of transporting liquid hydrogen. One uses available stainless steel to create storage containers in an environment of minus 253 degrees Celsius. For the second design, POSCO developed a new generation of stainless steel that specifically addresses the challenges of embrittlement. Other design elements have been incorporated into the tanks including a special breakwater to “prevent the problem of performance degradation due to phase change of liquid hydrogen due to changes in the level of liquid hydrogen and rough movements caused by the operation of ships.” They also reported that the insulation performance of liquid hydrogen fuel tanks was improved by applying a new concept support structure with a heat scattering function and a vapor cooling barrier. 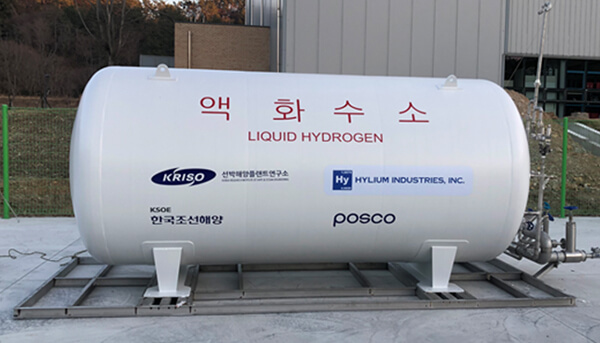 As part of the effort, the team has also built the first prototype 400kg 316L Liquid Hydrogen Fuel Tank for Ships. They used currently available stainless steel for the creation of the first tank.

Commenting on the developments to Reuters, KSOE executives predicted that the technology for the shipment of hydrogen will be available by 2025 and to have it commercially available by 2027. KSOE along with others have already developed prototype designs for hydrogen vessels as the progress in tanks designs and systems continue to move forward.

“Liquid hydrogen storage technology is a high-level technology that requires many factors to be considered,” said KRISO Director Kim Bugi. “This was possible because the four organizations came together to promote eco-friendly ships. We look forward to the day when it will be applied to hydrogen-powered eco-friendly ships and commercialized as soon as possible.”