Japan's foreign ministry has lodged a formal diplomatic protest with China regarding the construction of natural gas drilling platforms near a disputed boundary in the East China Sea.

Foreign Minister Fumio Kishida said that the Chinese are building the facilities for the development of gas fields along the median line between the nation's coastlines; there is no fixed, negotiated EEZ boundary between Japanese and Chinese territorial waters. Japan claims the region at least up to the median line, while China asserts a claim based on the extent of its continental shelf.

Japan asserts that China now has more than a dozen gas development structures on the Chinese side of the median line, and as an EEZ has not yet been agreed, it is "regrettable that China is advancing unilateral development" in the area, the Japanese Ministry of Foreign Affairs said in a statement. It noted that China and Japan had agreed in 2008 to cooperate on development of the area's natural resources. 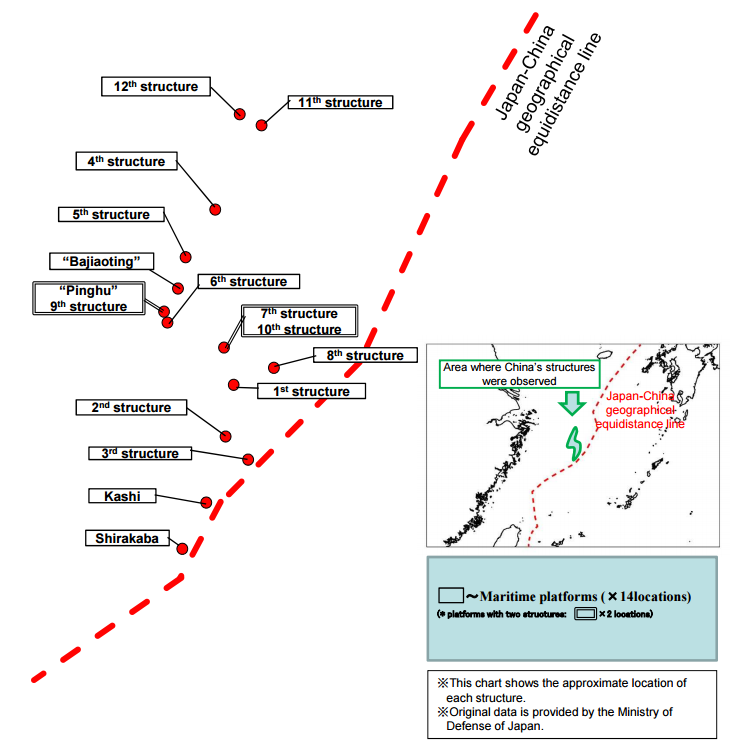 The East China Sea is a flash point for the two nations, which also contest ownership of the Senkaku (or Diaoyu) Islands, occupied by Japan but claimed by China. Japan recently activated a high-powered radar facility on Yonaguni at the far western end of its claims, 80 nm south of the Senkakus, drawing protests from the Chinese government. "The Diaoyu Islands are China's inherent territory. We are resolutely opposed to any provocative behavior by Japan aimed at Chinese territory," China's defense ministry said, and it defended its own naval, coast guard and air patrols in the area. China's government-backed civilian fishing fleet has also played a part in the dispute, as in China's claims in other Asian waters: in 2010, a Chinese fishing boat rammed a Japanese coast guard vessel off the islands, a major diplomatic incident.

The Senkakus are about 200 nm off Wenzhou, just northeast of Taiwan, and they form the basis for the southern end of Japan's maritime EEZ claims. The Chinese gas platforms discussed in Thursday's announcement are roughly 175 nm to the north of the island group.