Japan recently completed the fifth demonstration and test as part of its Fully Autonomous Ship Program known as MEGURI2040. Starting in February, the program which includes more than 30 companies and a total of 60 organizations, demonstrated different aspects of unmanned autonomous ship operations including maneuvering, docking, and departure using containerships and ferries. In the latest test, a coastal cargo ship was sent over long distances during four days including navigating through heavily congested waterways.

“We have created fully automated navigation by designing and demonstrating completely new systems through open innovation and taking into account the perspectives of ship operators,” said Koichi Akamine, President of Japan Marine Science. “I am confident that this successful demonstration represents a major step forward toward the practical implementation of fully automated navigation.”

For the endurance test, the systems were fitted aboard a cargo ship operating in Japan, the Suzaku. The 1,800 dwt vessel is 279 feet long and capable of traveling at speeds of up to 12 knots. The cargo ship departed from Tokyo Bay on February 26 traveling a total distance of approximately 426 nautical miles round trip to the Port of Tsu-Matsusaka, in Ise Bay south of Tokyo also on the main island of Honshu.

According to the consortium, for the trial the cargo ship was equipped with an autonomous navigation function and connected by satellite and a ground communication line to a fleet operation center. During the voyage, they tested functions such as remote maneuvering and engine-abnormality prediction to support the operation of a fully autonomous ship from shore.

The trial was conducted in a manner that simulated the actual operation of future fully autonomous ships, completing a series of voyages. The operation included offshore maneuvering, bay navigation, coastal navigation, and berthing maneuvering, using a comprehensive fully autonomous navigation system. They noted that one of the most challenging points of the demonstration was sailing through busy Tokyo Bay, which on average has 500 ships moving through the waterway each day. 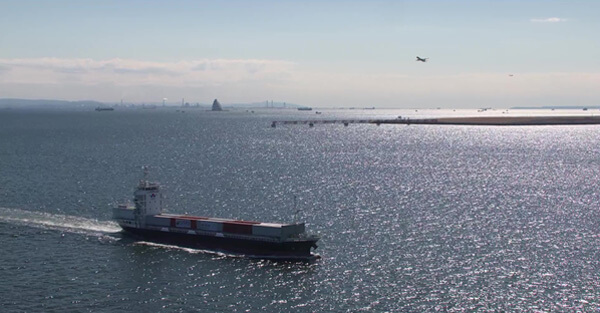 The DFFSA system designed for this trial has three primary components. It consists of a ship navigation system that controls the autonomous operation of the ship. There is also a shore-side system that monitors and supports the ship, including remote ship handling functions and also an information system that enables stable communication between the ship and remote operation center on shore. Among the functions managed from the shore-side center are monitoring of weather and sea conditions, traffic flow in the area, and the status of the ship’s equipment. In emergency situations, the system can switch to remote operation from the fleet operation center.

“The achievement of fully autonomous navigation is one way to address issues including a decrease in economic activity associated with an aging population and declining birthrate, insufficient crew capacity, and maritime accidents,” said Yohei Sasakawa, Chairman of The Nippon Foundation, which is overseeing all the demonstrations and research projects. “This technology, developed in Japan, is the first of its kind anywhere in the world. We also hope to contribute to the creation of international rules for fully autonomous navigation.”

As part of the demonstration, they used the APExS framework (an acronym for Action Planning and Execution System for Full Autonomous). According to NYK which led the development of the APExS-auto framework expands on the crewed autonomous ship framework creating an approach for fully autonomous ship operations. Currently, the framework includes high-speed computer-based information processing technology and risk analyses. The computer will execute maneuvering operations after receiving the crew’s approval.