Jacksonville and Savannah Invest in Expansions of Container Yards

The southeast U.S. ports of Jacksonville, Florida and Savannah, Georgia both approved significant investments to expand their container terminal capacities. Like ports around the world, these regional U.S. ports have experienced a surge in container volumes and are working to support their terminal operations.

A $48.8 million construction services contract was awarded on September 27 during the monthly meeting of the Jacksonville Port Authority (JAXPORT) Board of Directors to Superior Construction Company. The contract is for the first seven of eight phases on planned terminal improvements to enable the SSA Jacksonville Container Terminal at Blount Island to accommodate more containers. This port of the project focuses on 77 acres of the container yard.

JAXPORT’s total expansion project, with an estimated cost of $72 million, encompasses 93 acres at the terminal. Upgrades include densified pavement to accommodate taller stacks of containers and new facility gates and entryways to enhance traffic flow. Other additions include new electrical and fire suppression systems and LED lighting. Conducting the expansion in phases is planned to allow the terminal to remain open and operational throughout construction.

Upon completion of the project in 2024, the SSA facility will be able to accommodate up to 500,000 TEUs annually, a 150 percent increase over the facility’s current throughput. The expansion will grow JAXPORT’s total TEU throughput capability to nearly two million TEUs a year, an increase of more than 40 percent.

“We are excited with the progress being made to modernize SSA’s presence at JAXPORT, which will enhance our capacity and capabilities in Jacksonville,” said SSA Conventional President Mark Knudsen. “As completion of the deepening project nears, this facility offers an expanded and highly productive international container terminal that’s ready to handle the growing demands of cargo owners and shipping lines looking to take advantage of the efficiencies the region offers.” 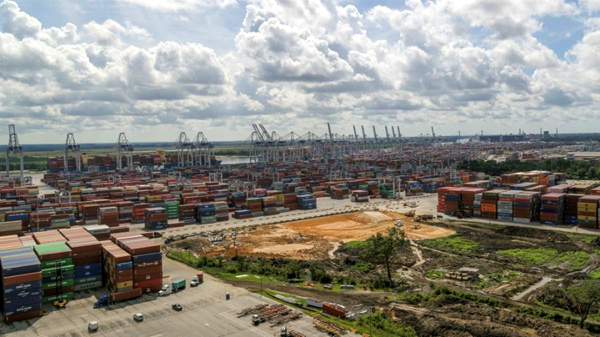 One hundred and forty miles to the north, the Port of Savannah is also launching a project to help expedite an additional 1.6 million TEU capacity that will begin coming online in December. The Georgia Ports Authority Board approved more than $34 million in investment in the container facilities.

Part of the approved expenditures included the purchase of 22.2 acres adjacent to the 145-acre West Expansion property. The board also provided funds to begin developing another 18 acres of land adjacent to the port’s 60-acre Peak Capacity project, which is currently under construction. In total, the developments will add 230 acres of container handling space, coming online in phases with full completion in 2023.

“In three months, this investment will begin to deliver the additional capacity we need to better accommodate increased volumes and demand for our services,” said Griff Lynch, executive director for the GPA. “I would like to thank our Board of Directors for their confidence in our ability to grow our existing terminals; our customers for sticking with us and, in many cases, increasing their commitment to Georgia’s ports; and to the men and women working throughout the supply chain, and especially GPA’s employees, I want to thank you for your hard work and dedication during unprecedented times in our industry.”

The Port of Savannah handled 485,595 TEUs in August, an increase of 10 percent, or 44,000 TEUs over the same month last year, which was the previous high for August. It was the second busiest month in GPA history, after only March 2021, when Garden City Terminal handled 498,000 TEUs.