On Tuesday, Ivory Coast began construction of a four-year, 560 billion CFA franc ($962 million) project to build a second container terminal and widen the canal leading to its main port in the commercial capital Abidjan. 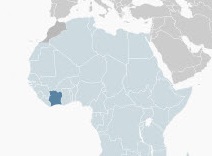 Among the busiest in sub-Saharan Africa, the port serves Ivory Coast, French-speaking West Africa's largest economy and the world's top cocoa producer and is also a gateway for landlocked nations to the north.

China Harbour Engineering Co Ltd was awarded the construction contracts for both projects with the bulk of the cost covered by a loan from China's Eximbank.

Construction of the new container terminal, which will be managed by consortium led by France's Bolloré, will last 48 months and cost 409 billion euros ($461 billion).

It is expected to allow Abidjan to increase container traffic from 1.2 million TEU to three million TEU by 2020.

In 2004, Bolloré Africa Logistics was awarded the 15-year concession for the first container terminal at the port of Abidjan. Anticipating the productivity needs created by the country’s growth, the company has undertaken a modernization program at the terminal.

The upgrades to the canal linking the port to the Atlantic Ocean will be completed in 36 months at a cost of 151 billion CFA francs.