Every year 62.7 trillion ton-miles of cargo are transported around the world, and looking to the future, the International Transport Workers’ Federation (ITF) and the World Maritime University (WMU) have released the first ever, independent and comprehensive assessment of how automation will affect the future of work in the transport industry.

The forward-looking assessment, produced by WMU, investigates how the global transport industry will change as a result of automation and advanced technologies, forecasting and analyzing trends and developments in the major transport sectors - seaborne, road, rail and aviation - to 2040 with an emphasis on the implications for jobs and employment for transport workers.

Foresight simulations conducted for maritime transport show that the introduction of highly automated ships will reduce the growing rate of demand for seafarers globally by 2040 compared to baseline projections based on current technology. The introduction of highly automated ships could reduce the global demand for seafarers by 22 percent. The simulations show that such effects are not compensated for by the increase in volume of seaborne trade projected for 2040 - this reduces the effect of automation eight percent. 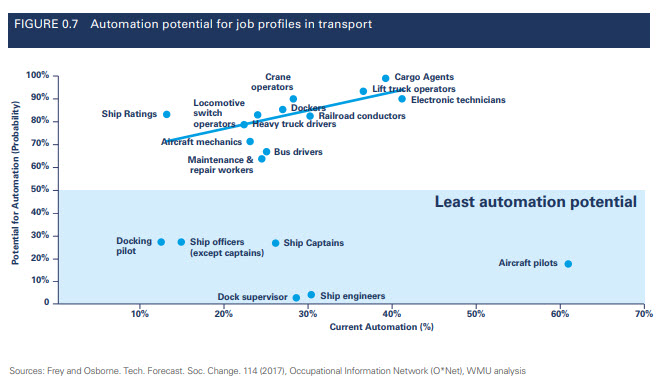 The Pace of Change

The report concludes that the introduction of automation in global transport will be “evolutionary, rather than revolutionary,” and that “despite high levels of automation, qualified human resources with the right skill sets will still be needed in the foreseeable future.”

Technological advances are inevitable, but will be gradual and vary by region. This will make their effects on employment predictable. Low- and medium skilled workers will be exposed to the high risk of automation. However, the pace of introduction and diffusion of technologies will depend on differences in the development stage of countries and their comparative advantages.

The report states that China's growth rate may decrease with time. Another factor is that growth rates for many of the developed countries may differ. France and Germany, for example, will decrease their current level of transport demand, while demand in others, like the United States, is expected to grow until 2040. Emerging economies, such as those of Mexico and India, may enjoy higher growth rates since trends in transportation follow trading patterns.

New and emerging patterns of transportation routes will be reflecting the volume in global trade; seaborne transport will still remain the dominant mode of transport for world trade. Today, seaborne transport accounts for more than 80 percent of international trade in terms of ton-miles. Deep-sea cargo-carrying ships dominate transport services, and four-fifths of vessel traffic is currently deployed in the northern hemisphere serving the West-East trade routes.

In line with the new pattern of transportation routes, vessel traffic will see an increase in the Indian and the Pacific Oceans, and seaborne transport growth is likely to be focused in the Asia and Indian Ocean regions, thereby highlighting the importance of Asian trade. Because of the changes in trade routes resulting in the growth of Asia’s share in global trade, the transport services facilitating this trade will also increase in volume in those regions.

In the European Union, the percentage share of inland waterway navigation together with rail transport in the transport sector is forecast to increase as a result of the development of technology, emission control policies and renewable energy policies. For instance, by 2040, the inland waterway transport system is expected to increase up to 14.4 percent in 2040 compared to 4.3 per cent in 2015.

IMO Secretary-General Kitack Lim has highlighted the need to consider seafarer training and standards as shipping faces increasing levels of technology and automation. Speaking at IMO Headquarters at the launch of a new report Transport 2040: Automation, Technology and Employment - the Future of Work, Lim set out key questions that will require focus from all stakeholders:  “How will the seafarer of the future manage the challenges related to an increasing level of technology and automation in maritime transport? How will the new technologies impact on the nature of jobs in the industry? What standards will seafarers be required to meet with respect to education, training and certification to qualify them for the jobs of the future?”

An important strategic direction for IMO is the integration of new and advancing technologies into the regulatory framework - balancing the benefits  derived from new and advancing technologies against safety and security concerns, the impact on the environment and on international trade facilitation, the potential costs to the industry and their impact on personnel, both on board and ashore. “Member States and the industry need to anticipate the impact these changes may have and how they will be addressed,” Lim said.