On Sunday, in a teleconference hosted by French President Emmanuel Macron, international donors pledged more than $300 million in relief and reconstruction aid for Lebanon, which is still reeling from the devastating blast at the Port of Beirut. On August 4, the central port was destroyed and a substantial swath of the city's waterfront was severely damaged when 2,750 tonnes of ammonium nitrate exploded on the port's silo pier.

Lebanon was in a state of political and economic crisis long before the explosion, and some of the foreign aid is conditioned upon reforms at the government level. The International Monetary Fund said Sunday that its contribution to the relief effort is contingent on financial reforms and efforts to shore up the government's solvency.

Many have blamed Lebanon's government for the blast, and large protests have rocked downtown Beirut for days, with rioters clashing with police outside of the parliament and several ministry buildings. About 100 people have been injured in the demonstrations so far, according to local media. Heeding the call, a handful of high-level officials have resigned their posts over the course of the past week, citing the blast and the government's failure to reform. Lebanese environment minister Damianos Kattar and information minister Manal Abdel Samad both stepped down over the weekend; their departures follow the exit of Lebanon's ambassador to Jordan, Tracy Chamoun, who accused the government of a pattern of “neglect, theft, and lies” in a televised speech Sunday. Interior minister Mohammed Fahmi may follow suit and announce his resignation on Monday, according to local media.

A large number of the deceased were foreign workers and truckers who were at the port, according to Beirut governor Marwan Abboud. He told television outlet Al Jadeed that this has created a challenge for identifying the dead. "No one is identifying them - this is a difficult task that takes time," he said.

Satellite imaging reveals the fate of the Rhosus

The source of the deadly blast was a confiscated cargo of ammonium nitrate which had been stored on the pier since 2014. It arrived aboard the Moldovan-flagged freighter Rhosus, which was arrested for unpaid bills and abandoned by her owner that year.

Rhosus' AIS signal disappeared in 2014. Her former captain told Radio Liberty that he believed the leaky vessel had been neglected and allowed to take on water; he had heard that Rhosus had ultimately capsized and sunk. In a new satellite imagery analysis published Sunday, the New York Times revealed the vessel's fate: Rhosus went down slowly in February 2018 at a position alongside the port's northern breakwater. She rests on her starboard side just 700 yards north of the pier where her cargo exploded.

Remote sensing is also contributing to the process of surveying the damage. Scientists from NASA's Advanced Rapid Imaging and Analysis (ARIA) team, working together with the Earth Observatory of Singapore, have used satellite-based synthetic aperture radar data to map the likely range of the blast and its effects. Synthetic aperture radar imaging taken from space can reveal ground surface changes from before and after a catastrophe, including the height of objects on the surface and their composition. In this case, it is used to illustrate the devastating results of the explosion. 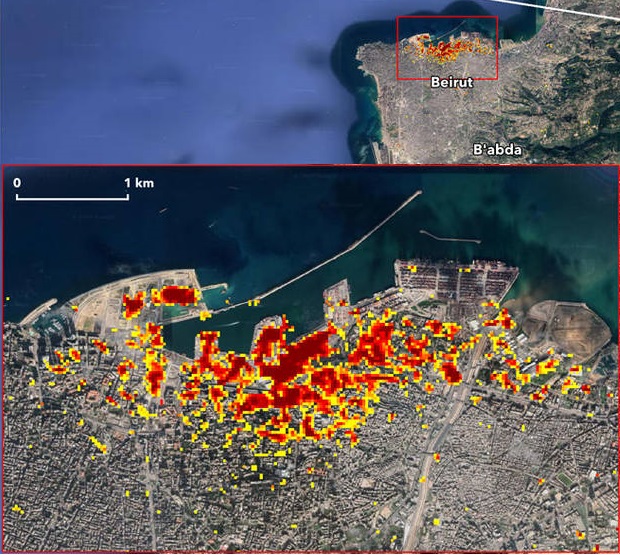 In the image above, each colored pixel represents an area of 30 meters. Dark red pixels represent the most severe damage, and a heavy cluster appears in the central port complex. Areas in orange are moderately damaged, and areas in yellow are likely to have sustained somewhat less damage, according to NASA. The map suggests far-ranging effects, including apparent damage at sites more than a mile away from the epicenter.