In its third quarter report, the International Maritime Bureau (IMB) reported a total of 121 recorded incidents of maritime piracy and armed robbery for the year to date, an improvement over last year's numbers and a significant decline relative to the average over the past five years.

The attacks included five hijackings, 11 attempted boardings, 13 vessels fired upon, and 92 boardings. The Gulf of Guinea remains a hot spot for attacks, representing about one sixth of the total, along with Somalia and Southeast Asia.  But a cluster of boardings off Libya and armed robberies at anchorages in Venezuela highlight the need for vigilance in other parts of the world. 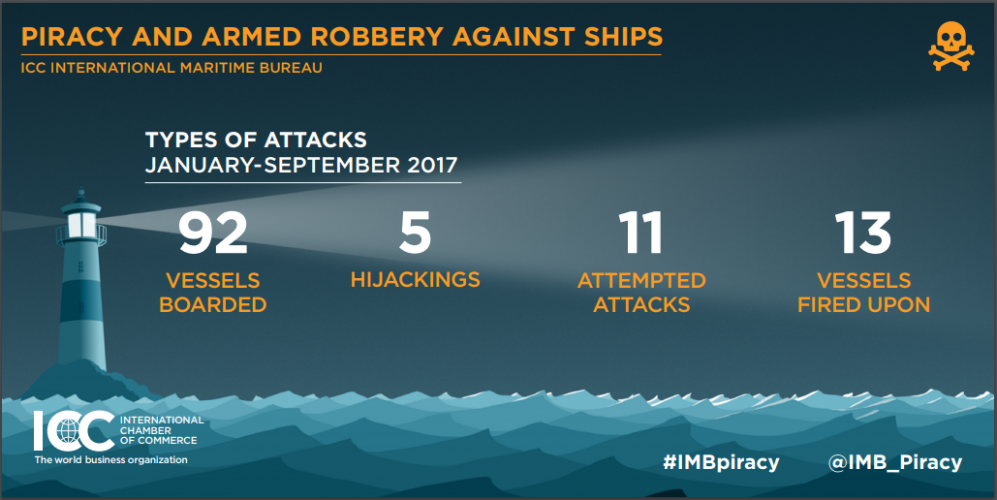 Some areas have shown major improvements. The waters off Indonesia had only 23 attacks from 86 in the same period in 2015. Piracy in the Strait of Malacca essentially stopped last year, due to strengthened naval patrols, and the hijackings and kidnappings by Abu Sayyaf militants in the Sulu Sea have ceased, thanks to the efforts of the Philippine military.

Others are still quite dangerous. The waters off Nigeria remain particularly risky, especially off Bayelsa / Bonny Island / Port Harcourt, where the number of reported hijackings and kidnappings has been on the rise. IMB noted that many more attacks may have gone unreported, and vessels should exercise particular caution when transiting this region.

Off Somalia, armed attacks have resumed, though allied naval forces have had considerable success in recent months in deterring or interdicting hijacking attempts. However, the area remains hazardous, IMB cautioned. "The threat of these attacks still exists in the waters off . . .  Bab el Bandeb, Gulf of Aden . . . Arabian Sea off Oman, Gulf of Oman and off the eastern and southern Somali coast," IMB wrote. "Somali pirates tend to be well-armed with automatic weapons and RPG[s] and sometimes use skiffs launched from mother  vessels . . . to conduct attacks far from the Somali coast."