The Russian icebreaker Kapitan Dranitsyn was slowed for days by sea ice as she made her way to the North Pole to support the MOSAiC expedition icebreaker Polarstern, and she now requires assistance before returning. The icebreaker Admiral Makarov departed from Murmansk on March 3 with fuel for the vessel.

Experts from 20 nations are studying the Arctic for a year on the German icebreaker Polarstern as she drifts across the Arctic Ocean, trapped in the sea ice. Kapitan Dranitsyn set sail to exchange crew and researchers on the Polarstern on February 3, reaching the vessel on February 28. 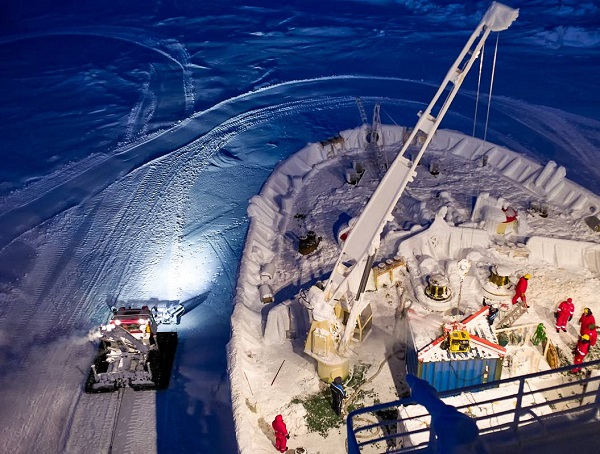 Unloading of Kapitan Dranitsyn during exchange of MOSAiC leg 2 and 3 (Photo: Michael Gutsche) 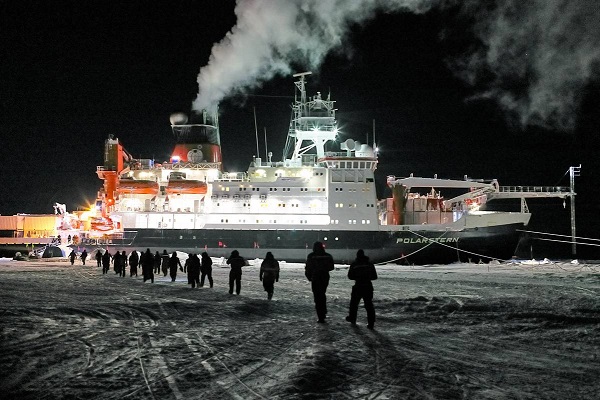 Kapitan Dranitsyn sailed from the Norwegian seaport of Tromso. The route ran through the Barents Sea and the Arctic Ocean in the most difficult weather conditions. The air temperature dropped to minus 33 degrees Celcius. Perennial ice, ice, snow and strong compression made it difficult for the ship to move. From time to time, she had to wait for improvements in wind and ice conditions, rebuild the optimal safe route and bypass heavy ice sections. On such days, Captain Dranitsyn traveled less than 20 miles. 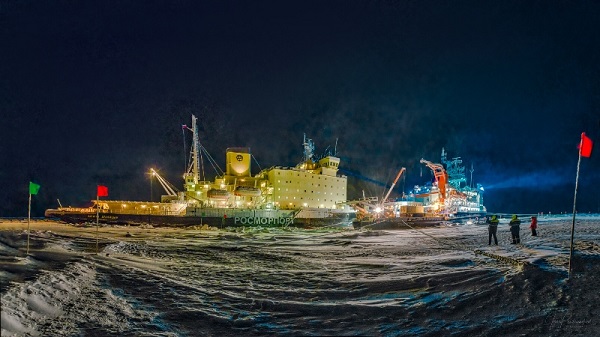 Both vessels set new records. On February 24, Polarstern's drift in ice took her to 88°36’ North, just 156 kilometers from the North Pole. Never before has a ship ventured so far north during the Arctic winter. Additionally, two days later, the Kapitan Dranitsyn, shortly before her rendezvous with Polarstern at 88°28’ North, reached the northernmost position on her mission, marking the first time a ship had made it so far north under her own power so early in the year.

MOSAiC is being coordinated by the Alfred Wegener Institute, Helmholtz Centre for Polar and Marine Research (AWI). Professor Markus Rex from AWI, Leader of the MOSAiC expedition, said: “My hat goes off to Captain Alexandr Erpulev for successfully navigating the icebreaker Kapitan Dranitsyn through the Arctic winter and virtually to the North Pole.”

The wind-chill temperature around Polarsten can reach 58 degrees below zero Celsius. Thanks to these extreme temperatures, only a day after her arrival, the channel of open water left behind by Kapitan Dranitsyn had refrozen so rapidly and intensively that the researchers could walk on it.

Observations from Polarstern indicate that ice thickness in the region has doubled to an average of 160 centimeters since December, which corresponds to a growth rate of roughly ten centimeters per week.

In addition, with the aid of helicopter laser-scanner readings, Polarstern’s radar system and buoys, the researchers have been able to observe how the ice deformed and channels opened and closed again. Thanks to the warming of the Arctic Ocean, smaller and thinner ice floes are becoming more common. Driven by the wind, they can collide and overlap, producing pack ice hummocks up to four meters tall. Since a great deal of their mass lies underwater, some hummocks are 20 to 30 meters thick – a phenomenon that now represents a challenge for the resupply icebreakers.

In contrast, readings taken on the ice, on board ship, and with weather balloons revealed that the air temperature just above the ice was far lower than at a height of 20 meters. In the lowermost 10 meters there can be temperature differences of more than four degrees Celsius, which has a major influence on the increase in ice thickness.

ROV dives showed marine life under the ice. “We’ve never had the opportunity to study the zooplankton and polar cod up here so extensively at this time of year. In February we even repeatedly saw a seal under the ice, which is apparently finding sufficient food, despite being practically at the North Pole. And on the surface, we sighted a polar bear and several Arctic foxes,” says Christian Haas, Professor Christian Haas from the Alfred Wegener Institute, Chief Scientist for the second leg of the Polarstern journey.

Over the next few weeks the sea ice is expected to become even denser, and the next crew exchange, in April, will most likely be done by plane.

The expedition in numbers

From December 13, 2019 to February 27, 2020, the Transpolar Drift carried Polarstern a total distance of 672 kilometers; however, given the meandering course of the drift, the ship only covered a linear distance of 406 kilometers.

The expedition came within 156 kilometers of the North Pole.

Using snowcats, engineers created a 900-meter-long airstrip on the ice.

On February 1, the air temperature plummeted from an unseasonably warm minus 11.4 degrees to minus 38.2 degrees Celsius, the most intense cold snap observed during this leg of the expedition.

The longest excursion was a ski tour to an automated monitoring station roughly 10 kilometers from Polarstern. The tour was completed in total darkness.